SEJONG, June 24 (Yonhap) -- The nominee for the new head of the National Tax Service (NTS) said Saturday he plans to expand monitoring on possible tax evasion by foreign companies based in South Korea.

Han Seung-hee said the agency was currently preparing for a new policy slated to be implemented in December that aims to request multinational firms to hand in details of international transactions.

Han said the tax agency was also moving to secure an additional workforce to deal with a possible rise in tax disputes due to increased surveillance on multinational companies.

Turning to a controversy over a steady surplus in tax revenues observed since 2015, the new NTS chief-nominee insisted the amount exceeding earlier forecasts had been caused by an increase in sources prompted by a rise in the size of the country's economy, instead of a rise in tax probes.

"More than 90 percent of tax revenues came from tax payers' voluntary declarations," Han said. "The NTS is rather reducing investigation and post-verification procedures."

Accordingly, Han claimed it was wrong to say the NTS was slapping on excessive taxes for its performance.

"There were various factors behind the increase in tax revenues in 2015 and 2016, including improved performances of companies, the growth of nominal gross domestic product and income," Han added. 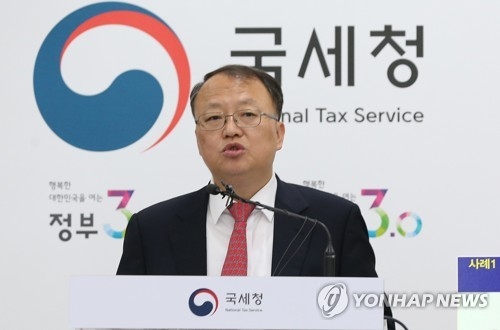