The semifinals and finals for these two classes are scheduled for Sunday.

Both South Koreans in the action, Kim Tae-hun in the men's and Sim Jae-young in the women's, made it to the semifinals.

Kim, who is chasing his third consecutive title in the men's under-54kg, cruised through the early stages with relative ease.

Kim beat Kitso True Molaodi of Botswana in the round of 64 by 15-2, and then knocked out Ryuta Matsui of Japan in the next round by 29-3. Kim then beat Hassan Haider of Britain 28-3 to reach the quarterfinals.

Against Deniz Dagdelen of Turkey in the quarters, Kim opened up an 11-1 lead in the first of three two-minute rounds. Dagdelen cut it to within 11-5 early in the third round, but Kim promptly picked up two points with a valid kick and went on to win by 27-7.

Sim defeated Fadia Farhani of Tunisia 15-5 in the quarterfinals, after dispatching Anargul Sabyr of Kazakhstan in the round of 32 and then Shyu Nai-Yun of Chinese Taipei in the round of 16.

Also in the same class, Dina Pouryounes Langeroudi, the first refugee athlete competing at a WTF world championships, was knocked out in the round of 32, losing to Andrea Ramirez Vargas of Colombia 6-2. 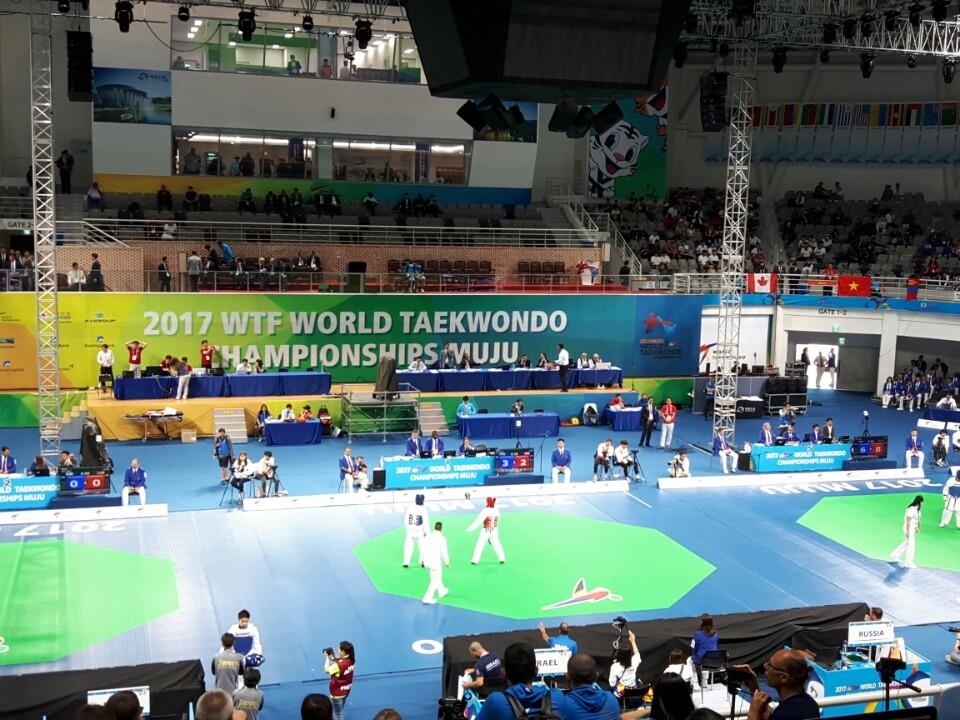 This is the 23rd edition of the WTF's signature tournament and seventh to take place in South Korea, the birthplace of taekwondo.

It's the largest world championships ever, with 971 athletes and 796 officials from 183 nations. The 2009 event in Copenhagen had previously been the largest with 928 athletes from 142 nations. The WTF said 17 countries, including Togo, Tanzania and Malawi, are competing for the first time.

The opening ceremony is scheduled for later Saturday, and will feature a historic performance by a demonstration team from the North Korea-led International Taekwondo Federation (ITF).

The ITF's delegation of 36, with 32 North Koreans, arrived in South Korea on Friday. And its 12-member demonstration team will perform at a WTF event, marking the first of its kind to be held south of the inter-Korean border. The two Koreas technically remain at war as the 1950-53 Korean War ended only with an armistice, not a peace treaty.