SEOUL, June 24 (Yonhap) -- South Korean President Moon Jae-in on Saturday invited North Korea to the Winter Olympic Games to be held in the country early next year, while welcoming a North Korean delegation to the World Taekwondo Championships.

"I believe in the strength of sports that has been establishing peace. I am glad to see the first sports exchange of the South and the North under the new (South Korean) government take place at this event," Moon said in his congratulatory speech marking the opening of the event hosted by the World Taekwondo Federation (WTF).

The new South Korean president was speaking before 971 athletes and 796 officials from 183 countries, making the seven-day biennial event in Muju, located 240 kilometers south of Seoul, the largest of its kind ever to be held. 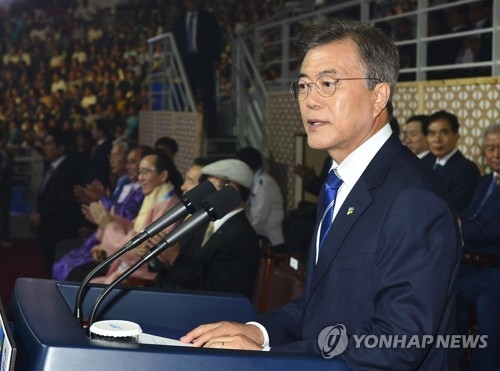 The participants included a 36-member delegation, including 32 North Koreans, from the North Korea-led International Taekwondo Federation (ITF), with a 12-member demonstration team also set to stage its first-ever performance in South Korea.

"It will mark the first time the ITF will perform at a WTF event held in South Korea," the president said.

"Friendship and goodwill exchanges between the two federations will of course greatly contribute to reconciliation between South and North Korea, as well as the establishment of peace on the Korean Peninsula," he added, noting the WTF was set to send a demonstration team to an ITF event to be held in Pyongyang in September.

"I wish the achievement made by taekwondo will be repeated at the PyeongChang Winter Olympic Games next year. If a North Korean delegation takes part in the PyeongChang Winter Olympics, I believe it will greatly contribute to realizing the Olympic values of friendship and peace," President Moon said, according to a script of his remarks released by the presidential office Cheong Wa Dae in Seoul.

Also present at the opening of the taekwondo championships in Muju were Chang Ung, North Korea's sole member of the International Olympic Committee, and Ri Yong-son, the North Korean head of the ITF.

President Moon especially extended his welcome to the two, noting their journey to South Korea must have been the longest. Before his speech, Moon shook hands with Chang and exchanged a few words with him.

South Korea and North Korea remain divided and technically at war as the 1950-53 Korean War ended only with an armistice and not a peace treaty. 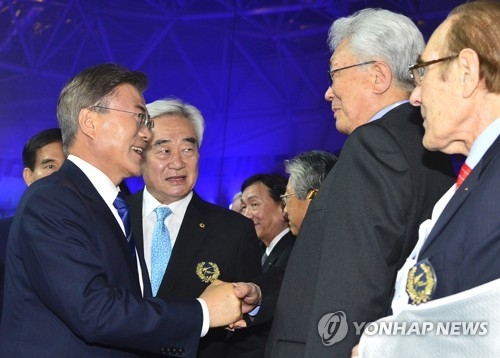 The ideas may well get some traction, as IOC President Thomas Bach is scheduled to visit Muju for the WTF championships' closing ceremony next Friday. During his stay, Bach is expected to discuss the issue with relevant parties.

In his speech, Moon said he'd once again like to feel the emotions from watching the joint march of the two Koreas in the opening ceremony of the 2000 Sydney Olympics. Moon also made references to the 1991 World Table Tennis Championships and the 1991 FIFA World Youth Championship, two competitions where the Koreas fielded joint teams.

For a joint march in PyeongChang to materialize, North Korea must first qualify to compete in the Olympics. North Korea didn't participate in the 2014 Winter Olympics in Sochi, Russia. For PyeongChang, the North's last shot is in pairs figure skating, and its skaters' fate will be determined in September.