The World Taekwondo Federation (WTF) World Taekwondo Championships started its seven-day run earlier in the day at Taekwondowon in Muju, about 240 kilometers south of Seoul. This is also the first world championships since the WTF adopted a series of rule changes at its General Assembly in November.

One particular change will see competitors earn two points for kicks to the body, up from one point previously.

The WTF has been tweaking rules for the past several years, hoping to help taekwondo shed its image of being a boring sport to watch.

And four of the best in the Korean martial art said they appreciated the WTF's efforts.

"I think the WTF has been doing a wonderful job of trying to make our matches more dynamic and exciting," said Oh Hye-ri of South Korea, the reigning Olympic gold medalist in the 67kg class, at a press conference at Taekwondowon. She'll be competing in under-73kg at the world championships.

"From the athletes' standpoint, we have to adjust to the new rules as quickly as we can," she added. "And it falls on us to try to put on entertaining shows and excite the crowd." 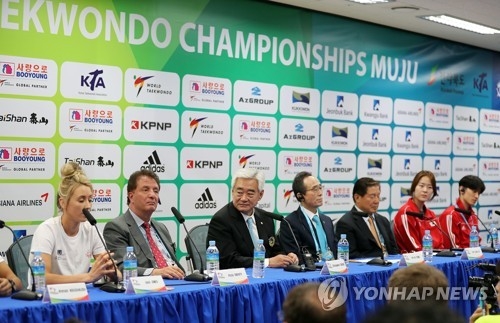 Jade Jones of Britain, the two-time reigning Olympic champion in the women's 57kg, said she "really" likes the new rules, having already competed once under them.

"It's gotten more interesting to watch," she said. "With two points for body shots, the score goes a lot higher. I've just been training and trying to learn the new rules as fast as I can."

Ahmad Abughaush of Jordan, who won the 2016 Olympic gold in the men's 68kg, said he also likes the new rules because they can "attract more people to watch taekwondo."

South Korean fighter Lee Dae-hoon, the Olympic bronze medalist in the men's 68kg, agreed with the others' sentiments, but he said there might be some gray areas in referees giving cautions in certain situations. 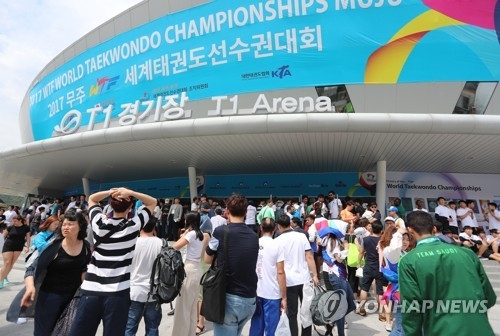