The WTF is headquartered in Seoul and is the official international taekwondo governing body, as recognized by the International Olympic Committee (IOC). The ITF, with North Korean Ri Yong-son at the helm, is based in Vienna but has different sets of rules than the WTF.

The two organizations signed a "Protocol of Accord" in August 2014, a landmark agreement that deals with the exchange of demonstration teams, among other matters of cooperation. 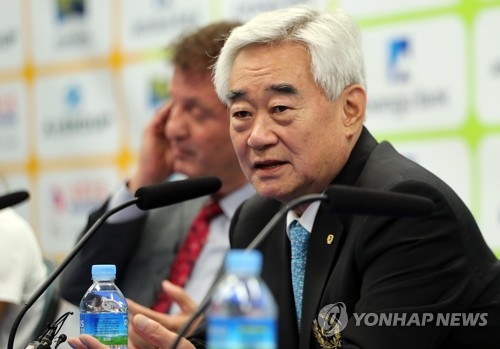 During the ITF's stay here, Choue is expected to meet with ITF leaders to discuss the WTF's reciprocal visit to Pyongyang in September, when the ITF holds its own world championships.

"The ITF officials have said they are here to honor our agreement," Choue said at a press conference before the opening ceremony. "It states that (our demonstration teams) should pay each other visits. And I told the ITF that it's important to honor that, and they said they're going to do their best to make it happen."

The agreement states, "WTF and ITF will form respectively their own taekwondo demonstration teams consisting of multinational practitioners and make the active promotion of taekwondo through the world with their international tours all over the world, including the southern and northern parts of Korea, the motherland of taekwondo, according to the timing and maturity of the circumstances."

Choue said while the two organizations have discussed cooperation, they've never broached the possibility of merging or integrating the two bodies.

"Protocol of Accord makes it clear that we must mutually respect each other's organizations," Choue added.

Choue said the WTF will create a new professional taekwondo tournament and open the doors for practitioners from all backgrounds to participate in it, "as long as they follow our competition rules."