Lee Dae-hoon of South Korea, the bronze medalist in the men's 68kg at the Rio de Janeiro Olympics, and Ahmad Abughaush of Jordan, who beat Lee in the quarterfinals en route to winning the gold medal, will be on a collision course to meet in the final at the World Taekwondo Federation (WTF) World Taekwondo Championships.

The competition started Saturday at Taekwondowon in Muju, some 240 kilometers south of Seoul. The men's under-68kg will begin on Monday with the preliminary rounds, and the semifinals and final will be on Tuesday. 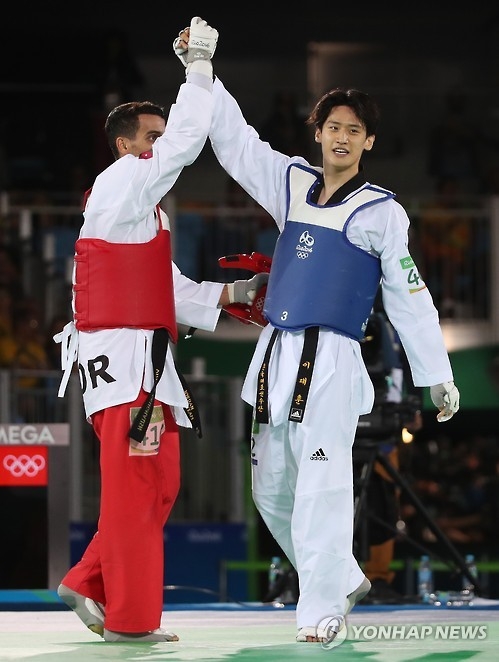 Based on the draw, Lee and Abughaush won't meet each other until the final, if both do get that far.

At the Rio Olympics, Lee was regarded as a strong gold medal contender, but Abughaush beat him 11-8 in the quarterfinals to foil Lee's bid for his first Olympic gold.

Abughaush went on to win the gold and became the first athlete from Jordan to win an Olympic medal of any color.

Back then, Lee made headlines for his display of grace in defeat, as he applauded the winner on the mat and grabbed Abughaush's hand and raised it in celebration. Lee said at the time he wanted to show people that he accepted his loss so that Abughaush would be able to enjoy his victory even more.

Less than a year later, the two athletes were reunited and seated at the opposite ends of a long, rectangular table on the podium during a press conference Saturday.

Lee, 25, said while the loss was disappointing to him, he was happy to see the 21-year-old Abughaush having developed into a star representing Jordan.

"I thought before the Olympics that he could improve really fast, given his skills, mental fortitude and approach to taekwondo," Lee said. "And I think he'll continue to be a great athlete. We met in the quarterfinals in the Olympics and here, we can meet in the final. It's great to have this kind of opportunity."

Lee said facing someone of Abughaush's caliber is "an opportunity for me to grow, too."

"It'll be great to beat him this time," Lee added. "But more than that, I just want to have a good match."

Speaking through an interpreter, Abughaush said he's also looking forward to meeting Lee on the mat one more time.

"I hope to meet him in the final," the Jordanian added. "I am pretty sure it'll be interesting and you'll all enjoy watching it." 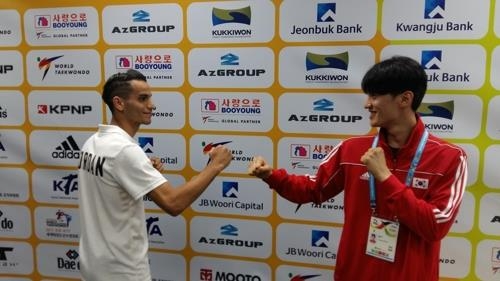