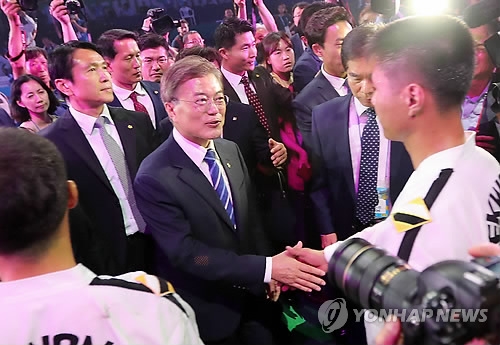 The ITF's show, which followed the WTF's performances, provided the finale to the opening ceremony. With a North Korean official providing commentary through the PA system, the practitioners started off with "Dangun" patterns, and followed up with some self-defense drills. Board and brick breaking were the highlights, though the demonstrators failed to break a few boards.

The WTF shows may have been more glitzy and almost resembled performance art with elements of music and lights also incorporated. By comparison, the ITF's performance was fierce, though a bit rough around the edges. 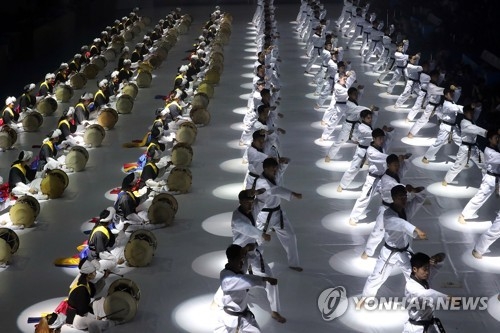 The WTF, led by South Korean Choue Chung-won, is headquartered in Seoul and is the official international taekwondo governing body, as recognized by the International Olympic Committee (IOC). The ITF, with North Korean Ri Yong-son at the helm, is based in Vienna but has different sets of rules than the WTF.

The two organizations signed a landmark "Protocol of Accord" in August 2014, which deals with exchanges of demonstration teams, among other matters of cooperation. 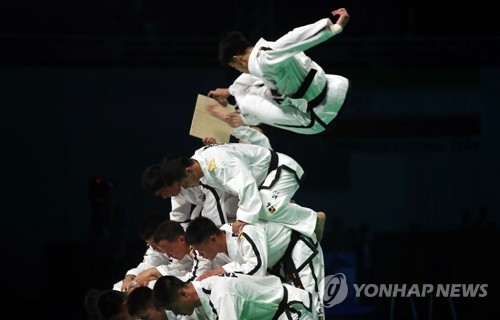 The ITF's delegation of 36, 32 of whom are North Koreans, arrived in South Korea on Friday. The demonstration team will also perform in Jeonju, a neighboring city of Muju in North Jeolla Province, on Monday, and then in Seoul two days later. It will return to Muju for the one final performance during the world championships' closing ceremony next Friday. IOC President Thomas Bach will be on hand for the occasion.

They will also discuss the WTF's reciprocal visit to Pyongyang in September, when the ITF holds its own world championships.

After the opening ceremony, South Korean President Moon Jae-in, who gave a congratulatory speech at the start, came down from his seat to shake hands with all South and North Korean performers. The practitioners then came together for group photos to close out the monumental evening.