SEOUL, June 24 (Yonhap) -- Thousands of South Koreans staged a protest rally in central Seoul on Saturday demanding the withdrawal of the deployment of an American high-tech anti-missile defense system as President Moon Jae-in and his U.S. counterpart Donald Trump are set to meet in Washington D.C. next week.

"The deployment of THAAD, which is unnecessary for the defense of the Korean Peninsula, should be pulled back," the protesters said in a rally held in Seoul Plaza at the heart of Seoul. The rally's organizer put the number of participants at 3,000.

The rally came ahead of the first Moon-Trump summit to be held from June 29-30, which is expected to feature the deployment of the Terminal High Altitude Area Defense (THAAD).

After taking office last month, Moon ordered the deployment to be delayed until an environmental impact assessment is carried out at its deployment site.

"The South Korea-U.S. summit to come next week should be a venue where the review of the THAAD deployment should be assured," the protests said. They also demanded the U.S. stop enforcing the deployment.

Following the rally, the protesters moved to the U.S. Embassy in Seoul to lay siege to the embassy building in central Seoul before leaving the embassy area to stage protest marches. 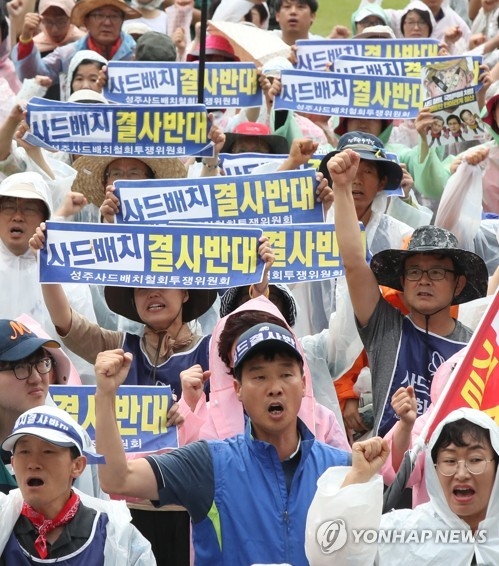