SEOUL, June 25 (Yonhap) -- South Korean President Moon Jae-in is expected to pitch for the benefits of the two countries' bilateral free trade pact during his upcoming trip to the U.S., but may face some tough challenges in talks with his counterpart Donald Trump who has been calling for the renegotiation of the landmark deal, industry watchers said Sunday.

There have been growing concerns here over a possible renegotiation of the Korea-U.S. Free Trade Agreement, dubbed KORUS FTA, as Trump has denounced the free trade agreement (FTA) as a "job-killing" deal and a "disaster."

The U.S. president has vowed to fix or scrap the open trade arrangement, even calling it "horrible." He said that the deal has caused a massive trade deficit reaching US$28 billion for the U.S.

Trump has already withdrawn the U.S. from the Trans-Pacific Partnership, a 12-nation free trade deal, and has stepped up attacks on the North American Free Trade Agreement.

During phone talks with President Moon, Trumped raised the topic of renegotiating the KORUS FTA first, before mentioning cooperation on the North Korean nuclear issue, an indication that the chief executive is eying changes to the trade deal.

In the interview with British weekly The Economist published last month, Trump said that the FTA with South Korea is "up for renegotiation" and the United States wants a "fair" deal with its ally.

"Everything in NAFTA is bad. That's bad. Everything's bad. But in the case of South Korea, we have a deal that was made by Hillary Clinton. It's a horrible deal," he said. "And it's up for renegotiation, and we've informed them that we'll negotiate."

The bilateral FTA went into force in 2012 after years of grueling negotiations. Experts here see it as mutually beneficial, though the U.S claims that it is "tilted" in favor of Seoul.

Earlier, President Moon said the FTA with the U.S. cannot be terminated since it is "mutually beneficial."

Even in case of renegotiations, Moon will stress that efforts should be made to protect the national interests and balance the benefits between the two close trading partners. 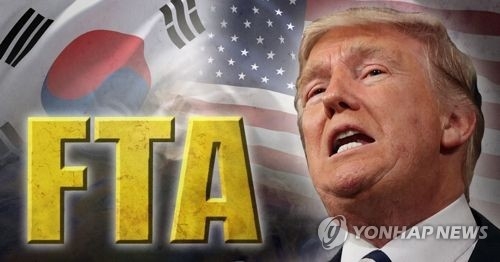 But, as the U.S. Trade Representative (USTR) under the White House pointed out in March, the trade deal is reciprocal for both countries, as the bilateral trade volume of products and services increased to $146.8 billion in 2015 from $126.5 billion in 2011, a year before the pact took effect in March 2012.

U.S. services exports to South Korea jumped 23 percent to $20.5 billion during the same period, it said.

A report from the Korea International Trade Association (KITA) showed that the free trade pact has been a "win-win" arrangement for both countries over the past five years.

The corresponding figure for U.S. products in the Korean market jumped to 10.64 percent from 8.5 percent over the cited period, the largest in 10 years, the KITA report showed.

Wendy Cutler, ex-acting deputy of the USTR, said earlier she strongly believes the Korea-U.S. trade agreement coincides with "not only the interests of Korea but also of the U.S."

She also argued that the U.S. trade deficit is the result of a global economic slowdown rather than the trade pact itself, adding that an FTA shouldn't be assessed in terms of the participating countries' surplus or deficit.

While South Korea posted firm growth in overall outbound shipments to the U.S. in the past five years, the U.S. has enjoyed a spike in sales of goods to South Korea, with those of automobiles specifically surging at an average of 37.3 percent. This boosted its market share in South Korea to a sizable 18.1 percent from 9.6 percent in the past, the KITA said.

In the meantime, South Korea's exports to the United States are expected to suffer as much as $17 billion in losses over five years if the two nations renegotiate the existing FTA.

If tariff rates are revised under renegotiation, South Korea's auto, machine and steel sectors would be the hardest hit, according to the report by the Korea Economic Research Institute, a private think tank.

The report presumed that the U.S. may want to raise tariff rates to the level seen before 2012 when the trade deal went into effect.

"President Donald Trump will clarify his will to renegotiate the KORUS FTA citing other issues," said Kim Doo-yeon, an analyst at Hana Financial Investment. "South Korea could see its trade surplus narrow," He said.