SEOUL, June 26 (Yonhap) -- South Korean actor Jung Woo-sung known for his good-looking face and colorful filmography, ranging from action to melodrama, for more than two decades didn't know much about what it's like to be a refugee being forced from his or her hometown due to such reasons as war and political persecution.

Now that he has spent around four years working with the United Nations High Commissioner for Refugees (UNHCR) in Seoul, Jung said that he understands about how horrible our "ordinary" life could become overnight and that the challenges many refugees are facing are not just their problems but could be those affecting us later on.

"Refugees are our problem. Given that children account for around 50 percent of refugees, when they grow up with care and love from the world, I believe that will change the way they communicate with the world," Jung told during a group interview recently held at the UNHCR's office in Seoul. "If unattended, they could turn into yet another problem that could come around to affect us."

The 44-year-old actor served as "honorary advocate" for the UNHCR in 2014. From 2015, he has been working as "goodwill ambassador" to raise the awareness of challenges refugees are confronting throughout the world. 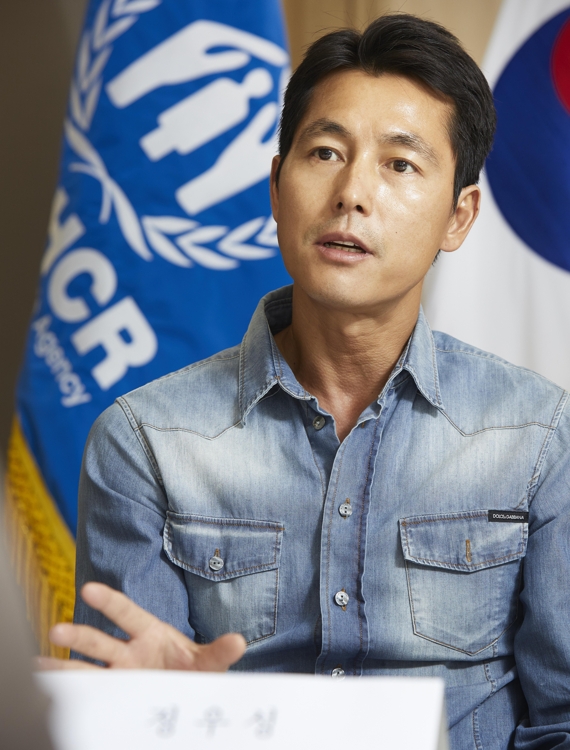 Jung has learned their predicament by visiting refugee camps in Nepal in 2014, South Sudan in 2015 and Lebanon in 2016. Recently, he made a trip to Iraq to see first-hand the abject situations facing those forced out of their homes.

Jung said that whenever he sees them, he tries to keep his eyes and ears open to what they have to say.

"From time to time, we approach those in need without considering their positions with the name of doing good to them," he said. "However, doing good to somebody should be done by taking into consideration the situation facing those recipients."

"When you go there, you shouldn't ask what you want to hear but should feel what they have to say. If you say nothing and wait, they ask and start to say what they want to say," he added.

He emphasized that the reality many refugees are facing right now harks back to what Korean people went through during Japan's colonial rule and the 1950-53 Korean War, saying that it is wrong to say that the refugee problem is confined to some countries halfway around the world.

He also said that he has realized how valuable it is to have an ordinary day-to-day life by looking first-hand at the hard time that many refugees are having around the world.

"When the (Korean) war broke out, people had to leave their homes and their ordinary lives behind. ... We should remind ourselves of how valuable it is to live our current life and the fact that all those refugees used to be just like us."

Asked what would be his objective as goodwill ambassador at the UNHCR, he noted that there are still many people out there asking what we can get in return for helping refugees, saying that it is a perception that he wants to dispel during his work at the agency.

"It is natural to help those in need, and it is, in particular, our obligation to help them since we have the refugee act in place," Jung said, referring to the act aimed at making it easier for newcomers to apply for refugee status and providing financial support for those awaiting the results of their applications. "I think I will have accomplished my duties here when I stop hearing such questions."

Jung said that there has been one consistent thing he has been hearing from people living in those refugee camps, which seems to prove that there is hope even under the unbearable living conditions and that even those in predicaments want to help others when things improve.

"Life should go on. That's what I have consistently heard from those in the camps. They hope that they will return home someday in the future leaving behind all their suffering," he said. "They also want to keep educating their kids even in the camps. Their kids' dreams are to become lawyers, doctors, journalists and even actors. All of them are jobs that can help others in need."