According to the Korea International Trade Association (KITA), Asia's fourth-largest economy imported US$3.89 billion worth of foreign passenger and commercial vehicles by the end of May.

Sales of luxury German carmakers Mercedes-Benz, BMW and certain commercial vehicles increased compared to last year, but the drop in numbers for diesel cars made by Audi and Volkswagen hurt overall figures.

Reflecting the fallouts, import of diesel cars in the January-May period reached little over $1.67 billion, down a sharp 29.2 percent from a year earlier.

The plunge is far greater than the 3.6 percent on-year dip for foreign made gasoline vehicles this year. In the five-month period South Korea brought in $1.51 billion worth of cars that burn gasoline.

In comparison, import of commercial vehicles such as trucks and buses surged 32.5 percent compared to the year before to $280 million with numbers for specialized vehicles shooting up 64.3 percent on-year to $54 million, the latest KITA data said. 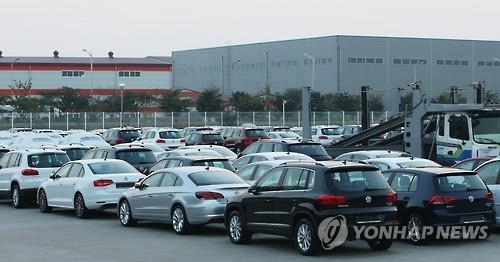