SEOUL, June 25 (Yonhap) -- Samsung Electronics Co. gained the No. 2 spot in the global wearable market in the first quarter of this year by overtaking Fitbit for the first time, on the back of the success of its Gear S3 smartwatch, data showed Sunday.

According to the data compiled by Strategy Analytics, Samsung captured 12.8 percent of the global market share in terms of sales during the January-March period, overtaking Fitbit with 12.2 percent. Apple maintained its No. 1 status with a commanding 53-percent market share.

The industry tracker said Fitbit lost out to Samsung, due to slowing demand for its bands and a late entry to the emerging smartwatch market. It added the success of Gear S3 nudged the South Korean tech giant to expand its presence.

In terms of total product shipment, separate data by the industry tracker showed Apple again remaining at the top with 16 percent market share, followed by China's Shaomi with 15.5 percent and Fitbit at 12.3 percent. 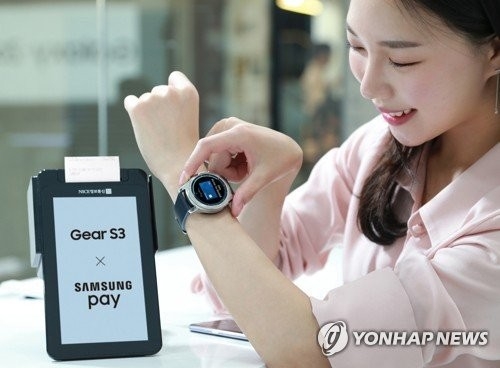 Samsung ranks No.2 in global wearable market in Q1

Samsung ranks No.2 in global wearable market in Q1