According to the Korea Automobile Manufacturers Association (KAMA) crossovers accounted for 40.28 percent or 53,206 of the 132,038 vehicles registered in the country during the one-month period. The numbers reflects both SUVs and other recreational vehicles (RVs).

The rise in SUVs is noteworthy since in 2011, they made up 19 percent of all new cars hitting the streets. This number shot up to 35 percent in 2016, before reaching new highs this year.

KAMA said that demand for SUVs is not limited to local markets, but is a global trend.

In 2010, the market stood at around 8 million units with numbers surging three-fold to 24 million worldwide in 2016.

Reflecting such popularity, sales of used SUVs and RVs made up 29.2 percent of all transactions this year in South Korea, data released by SK Encar, a certified used car seller.

It said this number exceeded 20.9 percent tallied for full-sized sedans and 17.5 percent for midsize vehicles sold in up until Thursday this year. In the past local consumers preferred sedans as the main form of conveyance.

Local market watchers said that strong demand for SUVs may last for some time since many existing drivers are likely to buy such cars down the line.

"Market polls by IHS showed 60 percent of SUV drivers opted for similar cars when making new purchases, which is higher than numbers for sedan drivers," an expert at Korea Investment and Securities Co. said.

Following such trends, local carsmakers such as Hyundai Motor Co. and Kia Motors Corp. are all moving to strengthen their SUV lineup. Earlier this month Hyundai and Kia both unveiled small-sized crossover to compete in both the domestic and overseas markets.

Hyundai, in particular, said it is gearing up to release crossovers that are smaller than the Kona and larger that its Santa Fe midsize SUV in the future to better appeal to consumers. 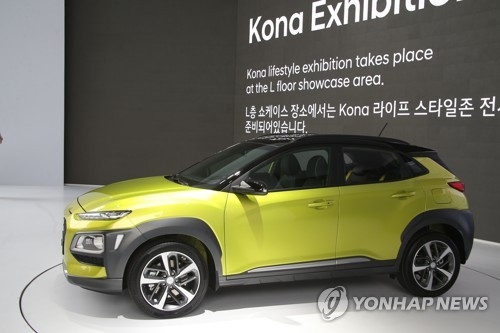 SUVs make up more than 40 pct of all new cars sold in S. Korea

SUVs make up more than 40 pct of all new cars sold in S. Korea