MUJU, South Korea, June 25 (Yonhap) -- At age 29, South Korean taekwondo practitioner Oh Hye-ri isn't exactly a young pup in a sport that requires endurance, strength and speed, not to mention an array of other skills.

But Oh, who will be competing in the women's under-73kg at the World Taekwondo Federation (WTF) World Championships here, still has a youthful exuberance about her, and it is with unbridled joy that she steps up to the mat.

"I still enjoy taekwondo so much and I am just having a lot of fun," Oh said Saturday, the opening day of the world championships. Oh's under-73kg division will have its preliminary rounds on Wednesday, with the semifinals and final set for the following day. 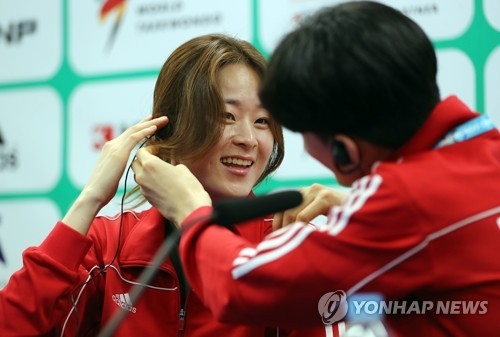 Oh is a late bloomer who didn't make her Olympic debut until last year's Rio de Janeiro Summer Olympics. And she went on to win the gold medal in the 67kg category.

Asked if she lost her sense of purpose after winning the Olympic title, Oh said she remains as driven as ever.

"If I had lost the sense of my direction, then I would have already quit and begun a new chapter in life," she said. "I am still hungry for more, and I enjoy what I do."

Oh has won virtually every major title that a taekwondo fighter can win. Before claiming the Olympic gold, she won the 2015 world title in the under-73kg. In 2010, Oh claimed the Asian Championships gold in the over-73kg.

The only major title missing on her resume is the Asian Games gold medal. She will take her crack at next year's Asian Games in Jakarta and Palembang, Indonesia.

"I'd love to win the Asian Games gold, but things won't always go my way," she said. "I just have to take it one match at a time, and then the rest will take care of itself."