SEOUL, June 25 (Yonhap) -- Labor unions of South Korea's five leading carmakers are in the process of negotiation with their managements to narrow differences over pay raises and other issues, industry sources said Sunda.

Workers and management of the five automakers -- Hyundai Motor Co., Kia Motors Corp., GM Korea Co., Renault Samsung Motors Corp. and SsangYong Motor Co. --, however, have not yet to iron out their differences, they said.

Representatives of the two sides of the country's leading carmaker, Hyundai, have held 16th rounds of talks since April 20, they said.

The unionized workers are calling for a 154,833 won (US$136) hike in their basic monthly pay along with a 30-percent increase in bonuses and other benefits, the sources said.

The management, however, is opposed to the proposal, citing that the sales have been hurt by Seoul's decision to deploy the Terminal High Altitude Area Defense (THAAD) system on its soil that angered Chinese consumers. China is the company's is the largest export market for Hyundai and its sister company, Kia Motors.

China has opposed the THAAD installation in South Korea as it claimed the battery system's powerful X-band radar system could spy on its military. Seoul in the past has maintained the anti-missile system is aimed at countering missile threats from North Korea.

Workers and management at GM Korea, the local unit of U.S. carmaker General Motors Co., have also held ninth rounds of wage-hike talks as of Thursday without making meaningful headway.

The union asks for a 154,833 won hike in their basic monthly pay along with a five-fold raise in bonuses workers receive, which was not welcomed by the management.

Representative of the labor union have asked the company to raise the base salary by 118,000 won while the management is being cautious, citing the overall management crisis despite improved earnings.

The labor union of Kia Motor has also demanded the basic salary to be increase and a 30-percent rise in bonus, a level similar made by Hyundai Motor's union. 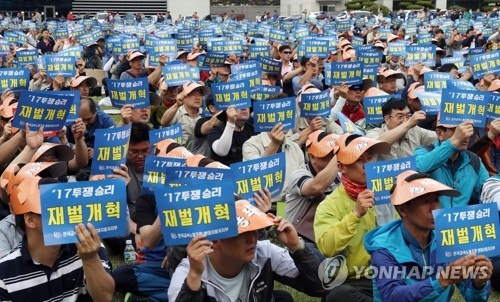