SEOUL, June 25 (Yonhap) -- South Korea and the United States stand at a "critical juncture" in their alliance in the face of the rapidly growing threats from North Korea but they will surely achieve their "common goal" to successfully address the problem, Seoul's top diplomat said Sunday.

Foreign Minister Kang Kyung-wha made the remarks in her speech to troops of the U.S. 2nd Infantry Division stationed north of Seoul. She visited the ground unit to commemorate the 67th anniversary of the outbreak of the Korean War.

"In the decades after the Korean War, the ROK-U.S. alliance has been the guardian of peace and prosperity on the Korean Peninsula," Kang told the troops. "For our two nations to go together... we must resolve our common threat. That is rapidly the growing threat posed by North Korea's nuclear and missile programs," Kang said.

"The ROK-U.S. alliance stands at a critical juncture to address this existential threat from North Korea and to ensure durable peace and stability on the Korean Peninsula," she added.

The policymaker voiced confidence that Seoul and Washington will achieve their shared goal through a strong alliance and joint defense posture.

Her trip to the U.S. troops comes ahead of President Moon Jae-in trip to Washington to meet with his U.S. counterpart Donald Trump later this week. Kang expected to see the two will discuss "big pictures" in dealing with the North's nuclear issue.

"Four days from now, our two presidents will have their first meeting in Washington D.C. My president will express his appreciation for the solid ROK-U.S. alliance and your indispensable contribution," the minister emphasized.

"Our two leaders will discuss joint strategy on furthering our comprehensive strategic alliance. They will also be drawing big pictures on how best to address the North Korean nuclear and missile threats," she added.

Kang also mentioned a U.S.-led operation, known as the Hungnam evacuation, carried out in the early period of the war and said that the president plans to invite the war veterans who took part in the operation.

It is known to be the largest evacuation that pulled United Nations forces and some 14,000 North Korean civilians from the namesake port in late 1950. President Moon's parents were among the refugees that went aboard the SS Meredith Victory that transported them to the southern areas of the peninsula. 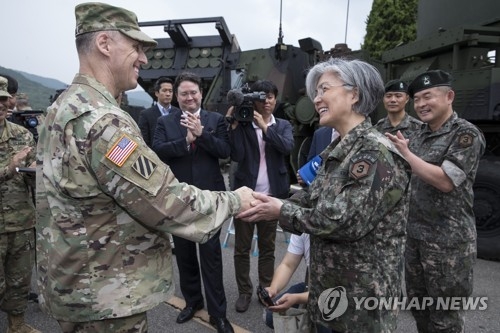