Park broached the idea at a luncheon meeting with Chang Ung, the lone North Korean member of the International Olympic Committee (IOC), at the club house of a country club in Muju, 240 kilometers south of Seoul. 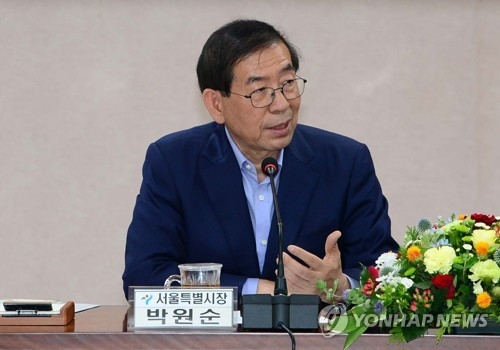 During the opening ceremony, South Korean President Moon Jae-in on Saturday invited North Korea to participate in next year's PyeongChang Winter Olympics to take place south of the border, saying sports has the power of fostering peace.

Less than 24 hours later, Park asked Chang to consider reviving the "Gyeongseong-Pyongyang Football" program, which was launched in 1929. Gyeongseong is the old name for Seoul.

"Gyeongseong-Pyongyang Football was quite popular back in the day, and if it comes back to life, I think Seoul residents will welcome it with open arms," Park told Chang. "I hope you'll give it careful consideration."

After their inaugural match in 1929 in Seoul, the two cities sent amateur teams to each other annually. It was halted in 1935 and then resumed in 1946, one year after the Korea's liberation from the Japanese colonial rule. The program faded into history after the peninsula was divided in 1948. The Koreas remain technically at war because the Korean War ended in 1953 on an armistice, not a peace treaty.

"I used to be able to offer a few words of advice on matters related to sports, but as I am getting older, I am moving away from them all, one by one," Chang said. "But I will deliver every single word of your message."

Choue Chung-won, the South Korean head of the World Taekwondo Federation (WTF), was also at the table, joined by Yu Zaiqing, an IOC vice president, Lee Hee-beom, president of the PyeongChang Winter Olympics organizing committee, and two South Korean lawmakers -- An Min-seok of the ruling Democratic Party and Lee Dong-sup of the People's Party.

The WTF, headquartered in Seoul, is the official international governing body of taekwondo, as sanctioned by the IOC. The ITF, with North Korean Ri Yong-son at the helm, is based in Vienna. The two organizations have separate sets of rules, but they signed a landmark agreement, titled "Protocol of Accord," in August 2014 to promote exchanges of their respective demonstration teams and to allow athletes to compete in each other's events.

Chang, who arrived in South Korea Friday, has deflected questions about Do's ideas, saying it was not his place to comment on them. Chang has said there could be some discussions on the issue once IOC President Thomas Bach arrives here Thursday to attend the WTF competition's closing ceremony.