SEOUL, June 25 (Yonhap) -- The government is considering a move to raise the price of diesel fuel with the aim of reducing fine dust emissions, government sources said Sunday.

Among plans under consideration by the Ministry of Strategy and Finance, higher taxes could be slapped on diesel gas, which is cheaper than gasoline in Seoul Korea. Diesel has been cited as the main culprit behind the fine dust in the country that has been cited for endangering the public health.

The ministry said it will hold a hearing with relevant ministries and agencies on Monday to discuss details about possible changes, including modifying the current oil tax system.

The move comes as President Moon Jae-in has pledged during his presidential campaign that he would reduce domestic fine dust emissions by 30 percent by the end of his term, by shutting down old coal-fired power plants and reducing the number of diesel car on the street.

Among the plans is to increase the price of diesel fuel, which is currently sells at around 85 percent of gasoline, to the 90-percent level, they said. More drastic plans include raising the price of diesel gas by 25 percent, which could a be a huge burden for users.

Opponents, however, argue that the current oil tax system should remain as diesel cars have not yet proven to be directly related to the fine dust.

The government previously faced severe opposition when it raised the cigarette tax to curb smoking in the country. 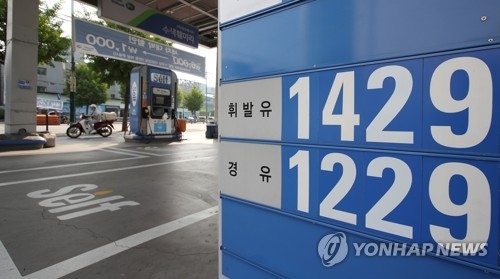