MUJU, South Korea, June 25 (Yonhap) -- A South Korean lawmaker said Sunday time was running out for the two Koreas to form a join squad at next year's Winter Olympics south of the border, urging political leaders from both sides to make a quick decision.

An Min-seok of the ruling Democratic Party attended a luncheon meeting here in Muju, some 240 kilometers south of Seoul, hosted by Choue Chung-won, the South Korean head of the World Taekwondo Federation (WTF). The WTF World Taekwondo Championships kicked off Saturday.

Chang traveled to Muju with a delegation from the North Korea-led International Taekwondo Federation (ITF), whose demonstration team had a performance during the WTF event's opening ceremony.

After Sunday's meeting, An told reporters that Moon's proposal was discussed over lunch and that it's a delicate issue that requires discussions with many different parties. 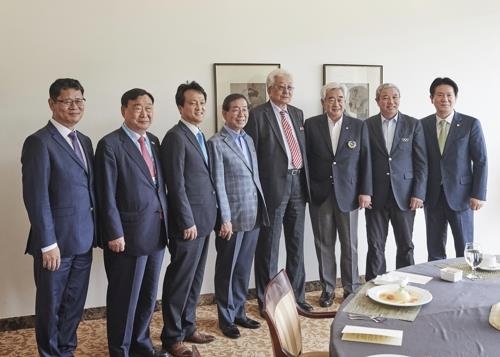 "We have to have a counterpart on matters related to inter-Korean sports exchanges," An said. "It'd be great if we got our wish, but we have to get North Korea, the IOC and international federations of winter sports involved. This requires multilateral talks. Our president gave us a big framework, and we have to try to make something out of that."

An, who has represented South Korea in previous inter-Korean sports talks, said time isn't on South Korea's side.

"The Olympics won't wait for us," An said. "But the nature of sports talks is such that, once the leaderships of both Koreas make their political decision, things can really pick up the pace and it could lead to great results."

An said since there is still much uncertainty surrounding the peninsula, the two Koreas would be wise to approach their sports exchange talks carefully.

"It could be summer or autumn, but if we do hold a new round of sports talks, we could discuss PyeongChang Winter Olympics within that framework," An said. "I think we're now at a point where we're trying to improve the quality of our discussions."

According to An, Chang is taking a wait-and-see approach and wanted to see if North Korean athletes could actually qualify for the PyeongChang Games first. North Korea didn't participate in the previous Winter Games in Sochi three years ago.

For PyeongChang, North Korea has its one last shot in pairs figure skating. Ryom Tae-ok and Kim Ju-sik just missed out on qualification at the International Skating Union (ISU) World Figure Skating Championships in Helsinki, and will take one more crack at an Olympic berth at the Nebelhorn Trophy in Oberstdorf, Germany, in September. Four last spots will be up for grabs