SEOUL, June 25 (Yonhap) -- President Moon Jae-in on Sunday made all-out effort to prepare for his upcoming talks with U.S. President Donald Trump, checking his schedules, messages and speeches in the United States, an official at the presidential office Cheong Wa Dae said. 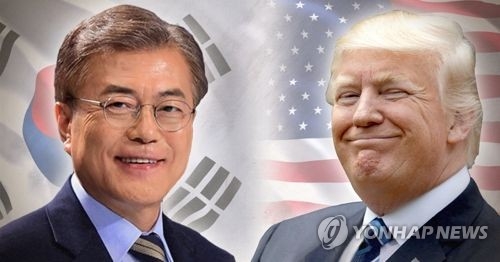 The new South Korean president will hold the two-day talks in Washington on Thursday and Friday (U.S. time) after heading for the United States on Wednesday for his first-ever summit with a foreign leader.

"South Korea-U.S. summit talks are the most important diplomatic event from our point of view. There are indeed a lot of things that need to be prepared," the official said. He said despite the lack of time aides are checking every aspect of the trip meticulously.

Moon's final itinerary is still being finetuned with the White House, the official said.

In particular, the presidential office is endeavoring to hammer out ideas which can reaffirm the alliance between the two countries and strengthen personal trust and friendship between the two leaders, the official said.
(END)