SEOUL, June 25 (Yonhap) -- South Korea's defense ministry said Sunday it is reviewing ways to conduct an environmental survey for the U.S. anti-missile system being deployed on its soil, but nothing specific has been decided.

"The ministry is in talks with related government agencies over ways to adequately carry out an environmental assessment on the Terminal High Altitude Area Defense (THAAD), and nothing at this stage has been decided yet," it said in a statement.

The release came in response to some local media reports that said the ministry has begun a process to carry out an environmental test for the THAAD deployment site in North Gyeongsang Province.

Upon the agreement between South Korean and the United States for the THAAD deployment in March last year, Seoul provided a former golf course in Seongju, some 296 kilometers southeast of Seoul, to station the powerful missile defense battery by the end of this year.

But the deployment has been suspended since the new liberal Moon Jae-in government, which took office in May 10, raised an issue with the timeline of the deployment and called for a thorough environmental assessment.

Tension is rising between the two allies as the new Korean leader has raised questions over the THAAD deployment which he claims came in haste by the previous government, while the U.S. began to raise "trust" issues with its counterpart.

The THAAD issue is expected to be one of the top agendas at the upcoming summit between Moon and U.S. President Donald Trump slated for later this week. 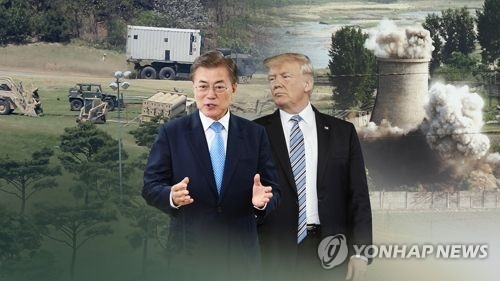