In the final, the two athletes were knotted at 3-3 after the first of three two-minute rounds. Then Kim put up six points on the board in the second round, thanks to a pair of two-point kicks and a three-point kick to the head. Hadipour Seighalani also received two "gam-jeoms," or deduction penalties.

After earning two points with a kick in the first round, the Iranian never scored another point by himself, benefitting only from Kim's penalties to get his six points.

And that wasn't nearly enough against the South Korean, who has also won an Asian Games gold medal and an Asian Championship gold medal.

Kim said he battled some early nerves as his competition began on Day 1 of the championships on Saturday with the preliminary rounds.

"I didn't really know what to expect, but I am glad to win my third straight gold after all," he said. "It was great competing before the home fans. They really gave me a lot of energy today and I had fun out there.

Kim said he enjoyed the luck of the draw, with most of the tough contenders ending up on the opposite side of the bracket. 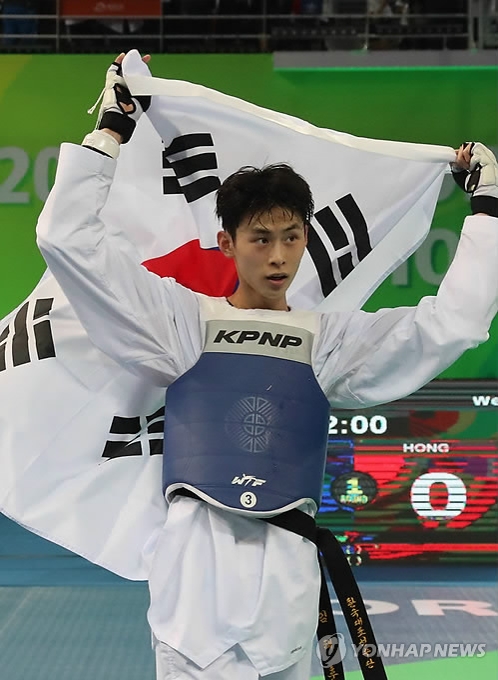 Kim had been a gold medal favorite before last year's Olympics but settled for bronze. The 22-year-old said he'd already put the disappointment behind him and put his focus squarely on the world championships.

"I'll keep doing my best and try to reach greater heights in the future," Kim said. "I'm happy that I was able to forget about the Olympics and get the best result possible here."

This is the first world championships with the WTF's new set of rules, approved last November, in effect. Athletes are now awarded two points for kicks to the trunk, up from one, and referees have begun calling more "gam-jeoms," or deduction penalties, for inaction and other infractions.

The changes were brought in to make taekwondo more spectator-friendly, and Kim said the new style of fighting is more physically demanding than before.

"With so many penalties being called now, the momentum within a match can shift quickly," he said. "No lead seems to be safe. I think the matches are more exciting now, and we as athletes have to take extra caution not to take too many penalties."

In the semifinals earlier Sunday, Kim blanked Vito Dell'Aquila of Italy 16-0. The match was called just 30 seconds into the third round, when Dell'Aquila picked up his 10th gam-jeom and was disqualified from the contest.