MUJU, South Korea, June 25 (Yonhap) -- A veteran North Korean sports administrator visiting South Korea has expressed his misgivings about forming a joint Korean team for next year's Winter Olympics south of the border due to the time crunch.

As an IOC member, Chang has been peppered with questions about Do's ideas. According to an official with the WTF competition, Chang spoke of his doubts about the South Korean minister's suggestions. 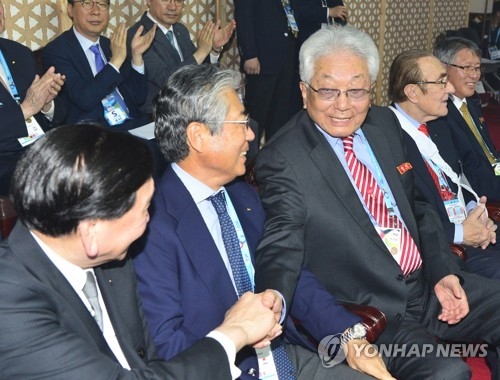 "When we fielded a join team at the 1991 World Table Tennis Championships, there were 22 rounds of inter-Korean talks, and they took five months," Chang was quoted as saying at a dinner reception Saturday, after the WTF championships' opening ceremony. "That is the reality that we're faced with."

The PyeongChang Winter Olympics will go on from Feb. 9-25.

As for moving some skiing races to Masikryong, Chang said, "As an Olympic expert, (I think) it's a bit late."

After Do broached the ideas, South Korean President Moon Jae-in, in a congratulatory speech at the WTF opening ceremony, extended an invitation to North Korea to take part in PyeongChang 2018.

PyeongChang flatly rejected the possibility of sharing events with North Korea in December 2014. Yet with liberal-minded Moon in office, PyeongChang 2018, the first Winter Olympics to be held in South Korea, has emerged as a potential platform on which to engage North Korea in sports exchanges.

While Chang kept mum about what went on at the meeting, An Min-seok, a legislator with the ruling Democratic Party, told reporters afterward that Chang took a cautious approach on a joint Korean team. According to An, Chang said he wanted to see if North Korean athletes could qualify for PyeongChang first.

North Korea, which hasn't been as successful in Winter Games as in Summer Olympics, has its one last shot in pairs figure skating. Ryom Tae-ok and Kim Ju-sik just missed out on qualification at the International Skating Union (ISU) World Figure Skating Championships in Helsinki, and will take one more crack at an Olympic berth at the Nebelhorn Trophy in Oberstdorf, Germany, in September. Four last spots will be up for grabs.

An, who has represented South Korea in earlier inter-Korean sports talks, also said the time indeed is running out, but added there's still room for hope.

"The nature of sports talks is such that, once the leaderships of both Koreas make their political decision, things can really pick up the pace and it could lead to great results," An said.