WASHINGTON, June 25 (Yonhap) -- A bipartisan group of U.S. senators have called on President Donald Trump to use the upcoming summit with South Korea President Moon Jae-in to reaffirm the firmness of the alliance and to expedite a full deployment of the THAAD missile defense system.

A total of 18 senators, led by Sens. Cory Gardner (R-CO) and Bob Menendez (D-NJ), made the request in a joint letter to Trump on Friday. The letter came after a separate group of 19 senators introduced a resolution welcoming Moon's visit. The resolution and the letter underscore the high interest the United States has in Moon's summit with Trump set for Thursday and Friday.

"We ask you to offer a firm assurance to President Moon that the bonds of our historic alliance are unbreakable and that the U.S. is fully committed to our defense treaty obligations with South Korea," the letter said, according to a full text released by Gardner's office.

"We also ask you to reiterate to President Moon that the United States is committed to working with the ROK to implement a full range of multilateral sanctions against the DPRK -- and to intensify those sanctions, if necessary and as merited by DPRK's behavior," it said.

Trump's "maximum pressure" policy can only be effective with full cooperation from Seoul, it said. 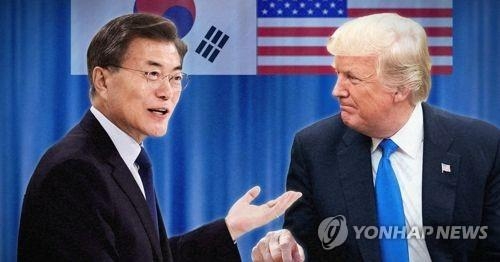 The senators also called for a fully deployment of the THAAD battery in the South at an early date. Two of the six THAAD launchers have already been installed, but the South suspended the deployment of the remaining four pending an environmental review.

"You and President Moon should seek a way to expedite the procedural review that is currently hindering the full deployment of the Terminal High Altitude Area Defense system," the senators said in the letter.

"We ask you to reiterate to President Moon that the decision to deploy THAAD was an alliance decision, and protects both U.S. troops and millions of South Korean citizens, while not posing any threat to South Korea's neighbors," they said.

They also called on Trump to condemn China's retaliation against the South for hosting THAAD.

"Finally, we also ask you to advance a robust bilateral economic engagement agenda, including securing a mutual commitment to fully and fairly implement the Korea-U.S. Free Trade Agreement (KORUS), and to seek new trade opportunities with the ROK that will benefit American businesses, exporters and workers," they said.

U.S. senators call on Trump to use summit with S. Korea to find way to quicken full THAAD deployment

U.S. senators call on Trump to use summit with S. Korea to find way to quicken full THAAD deployment