WASHINGTON, June 25 (Yonhap) -- Suspending annual joint military exercises between the United States and South Korea could lead to a weakening of the alliance, a former chief U.S. nuclear negotiator with North Korea said.

Former Assistant Secretary of State Christopher Hill made the point in a recent Project Syndicate article, expressing concern about the "freeze-for-freeze" idea that calls for the U.S. freezing or scaling back the exercises in exchange for the North freezing nuclear and missile testing.

"Advocates of this so-called 'freeze for freeze' approach say that such a tradeoff is only fair: The North cannot be expected to suspend its efforts to strengthen its defensive capabilities if the U.S. and South Korea are pursuing supposedly hostile military cooperation in its near abroad," Hill said.

"But this argument has it backward. In fact, it is the North whose activities are inherently hostile, and the South, along with the U.S., that is focused on defense. Indeed, planning for the annual U.S.-South Korea spring exercises is always based on the premise that North Korea has invaded the South, not vice versa," he said.

He cited Germany's 1939 invasion of Poland as an example. Upon the invasion, Britain and France declared war on Germany in accordance with their mutual defense treaty but did little to protect the ally, and Germany subjugated Poland quickly, he said.

"If the U.S. suspends joint military exercises with South Korea, its willingness or ability to respond to North Korean aggression in the South may become similarly weak," Hill said. 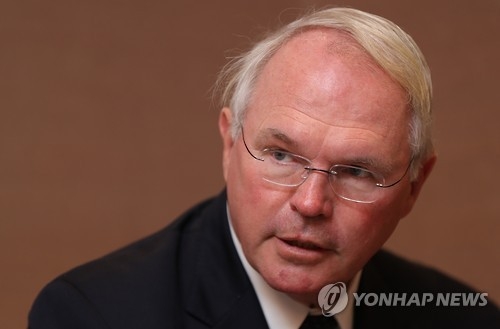 The "freeze-for-freeze" proposal is all the more dangerous, given the possibility that the suspension of missile and nuclear tests may not actually lead to a concomitant weakening of North Korea's nuclear program, he said, adding that testing is only a small element of a weapons program and not necessarily an essential one.

Hill also rejected the perceptions that Pyongyang would give up its nuclear program in exchange for a security guarantee, saying the 2005 six-party deal he negotiated with the North included not only a security guarantee but also economic and other concessions, but the North ultimately reneged on the agreement.

"The idea that North Korea will abandon its weapons programs in exchange for the promise of security and regime survival has been tested, has failed whenever it has been tested," Hill said, referring to the 2005 agreement.

Hill said that a stronger and more purposeful U.S.-China dialogue on the North is essential to resolving "what is emerging as the world's most urgent security problem."

"But the discussion should focus on direct measures to impede and undermine the country's inherently aggressive nuclear program -- not to offer more concessions that will only strengthen a rogue regime's hand," he said.