WASHINGTON, June 25 (Yonhap) -- The names of 3,300 U.N. troops killed in the Korean War were called out in Washington on Sunday in a ceremony commemorating the anniversary of the war's outbreak 67 years ago.

Representatives of 21 countries took turns calling out the names of the fallen troops at the Korean War Veterans Memorial in Washington for 12 hours starting at 7 a.m.

The names of soldiers were called in groups according to their countries in alphabetical order beginning with Australia. As a new country took its turn, its national flag was raised and its anthem was played.

"Had it not been for the sacrifices by the heroes from the 21 countries, the Republic of Korea would not exist today," Pyo Se-woo, defense attache at the South Korean Embassy in Washington, said in a speech at the start of the ceremony.

The United States led the 21-nation Allied Forces to help South Korea repel the Chinese-backed communist troops invading from the North. Nearly 38,000 U.N. troops, most of them from the U.S., were killed in action during the conflict.

The war ended in a truce, not a peace treaty, leaving the divided peninsula still technically at war. 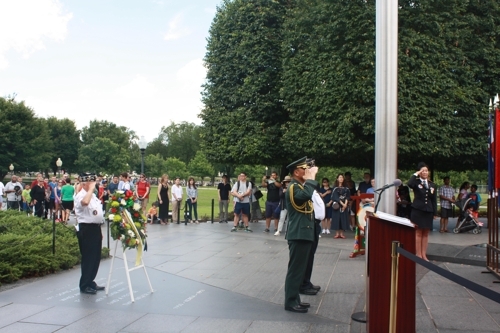 3,300 names of U.N. troops killed in Korean War called out in ceremony in Washington

3,300 names of U.N. troops killed in Korean War called out in ceremony in Washington