SEOUL, June 26 (Yonhap) -- South Korean golfer Ryu So-yeon has picked up her second LPGA win of the season in Arkansas, rising to the No. 1 spot in world rankings in the process.

Ryu claimed the Walmart NW Arkansas Championship at Pinnacle Country Club in Rogers, Arkansas, on Sunday (local time) with a three-round total of 18-under 195. Ryu shot a two-under 69 in the final round to set a tournament record in relation to par, and beat fellow South Korean Amy Yang and Moriya Jutanugarn of Thailand by two strokes.

Ryu also soared from No. 3 to No. 1 in world rankings, becoming the third South Korean, after Shin Ji-yai in 2010 and Park In-bee in 2013, to have that distinction. 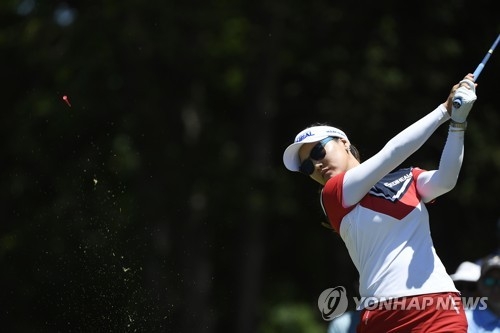 With US$300,000 in the winner's check, Ryu has now moved to first place on this season's money list with a little over $1.2 million. Ryu also leads all players with 2,195 points in the Race to CME Globe standings, thanks to 500 points from this victory. 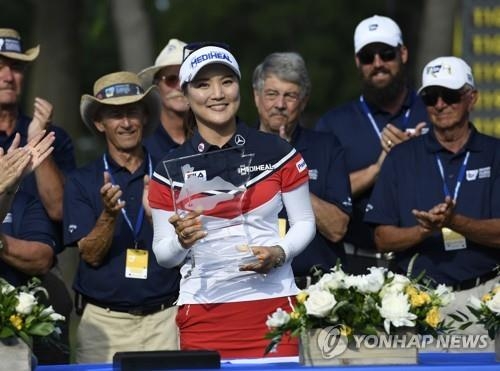 Ryu will ride this victory into the second major championship of the year, the KPMG Women's PGA Championship, in Florida starting Thursday.

She said she had been nervous about her chances overnight because anything could transpire on this golf course.

"With a five-shot lead, everybody assumes you're going to win the tournament," she said. "But this is golf. I shot 10-under yesterday, and that means someone had a chance to shoot 10-under as well. I missed the birdie putt at the second but was able to make the birdie at the third. I think that putt made me relax a little bit."

Ryu said her psychologist told her the night before that she shouldn't try to be perfect.

"To be honest, my game wasn't really great compared to yesterday," Ryu said. "I still have a few things to work on, but I am glad to win the tournament. And I'm ready to play another major next week."