SEOUL, June 26 (Yonhap) -- Choo Shin-soo of the Texas Rangers has blasted his 12th home run of the season, while also making a fine defensive play in the team's victory.

With the Rangers leading 3-0 with two outs in the second, Choo doubled that lead with a three-run home run to the second deck in right field. On a 0-2 count, Choo crushed a hanging slider by Yankees starter Michael Pineda for his first home run since last Wednesday.

It was the only hit of the game in three at-bats for Choo, who is now batting .257. 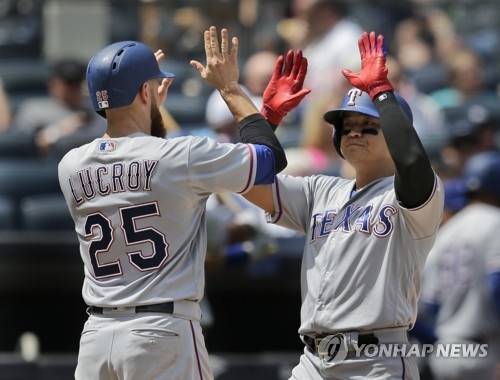 With a dozen home runs in 66 games so far, Choo is one shy of matching his career high for long balls in the first half.

Choo also made a potential game-saving play on defense in the seventh inning.

The Rangers were nursing a 7-5 lead with two outs and men at first and second, when Didi Gregorius hit a single to right. As Aaron Judge scored from second on the hit, Choo fielded the ball and fired a one-hopper to third baseman Adrian Beltre to cut down Gary Sanchez going from first to third.

It was the final out of the inning, and the Rangers held on for the nervy, one-run victory.