SEOUL, June 26 (Yonhap) -- Chiefs of South Korea's five major banks on Monday predicted the recovery of the country's economy to continue in the second half amid an uptrend in market interest rates.

The heads of KB Kookmin, Shinhan, Woori, KEB Hana and NH Nonghyup hinted they will tighten credit in the latter half to brace for a situation where rising market rates may lead to an increase in soured loans extended to troubled households and companies.

In a written interview with Yonhap News Agency, the bank chiefs said the current economic rebound will get a boost from a recovery in exports, growing corporate capital expenditures and expectations for the new government's economic policy.

Specifically, the top bankers projected Asia's fourth-largest economy to expand 2.7 percent to 2.8 percent this year from the previous year.

Shinhan Bank President Wi Sung-ho forecast the economy to grow up to 2.8 percent in the July-December period from a year earlier.

Ham Young-joo, chief of KEB Hana Bank, projected the economy to gain 2.8 percent in the second half from a year earlier, with the full-year growth rate likely to hover slightly above the central bank's 2.6 percent forecast. 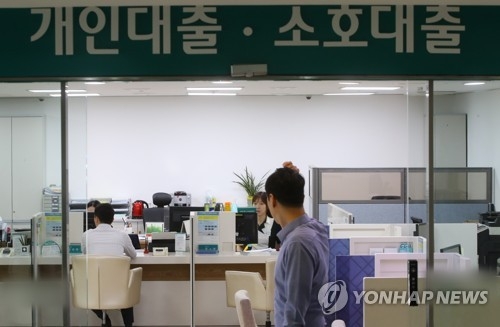 South Korea's exports, one of its growth engines, have shown a marked recovery in recent months. In May, exports soared 13.4 percent on-year on strong overseas demand for chips and other key items, marking the seventh consecutive month of increase. Overseas shipments also rose at a double-digit rate for five months on end.

All the bankers also expected South Korea's market interest rates to pick up down the road in the wake of the current economic recovery and a recent U.S. rate hike, prompting lenders to beef up risk management.

The Fed hiked the federal funds rate by 0.25 percentage point Wednesday, hiking the target range for the benchmark rate from 1 to 1.25 percent, a level that's on par with South Korea's. It marks the Fed's second rate hike this year following one in March.

The bank chiefs advised people to invest their assets in stocks rather than real estate in the second half, saying the stock market will continue to be brisk on expectations for corporate earnings bolstered by a global economic recovery.

South Korea's stock market has been on a roll in recent months amid upbeat forecasts of corporate earnings. The benchmark Korea Composite Stock Price Index (KOSPI) rose 7 percent in May from a month earlier, becoming the best performer among bourses in major advanced and emerging markets.
(END)