In the survey conducted from last Monday through Friday by local pollster Realmeter, Moon's support was tallied at 74.2 percent, down 1.4 percentage points from a week earlier.

Those who disapproved of his job performance made up 18.6 percent, up 1.2 percentage points, while 7.1 percent said they were unsure or refused to answer.

Opposition parties also continued to denounce Moon's controversial personnel choices, including Defense Minister nominee Song Young-moo. Song has been dogged by a range of allegations, including seemingly exorbitant payments for his advisory role at a law firm and a defense company, and false address registration.

In the survey, the rating for the ruling Democratic Party remained unchanged at 53.6 percent, while support for the main opposition Liberty Korea Party declined 0.2 percentage point to 14.5 percent.

The ratings for the People's Party and Justice Party were tallied at 6.3 percent each, while the figure for the Bareun Party stood at 6.2 percent.

The survey, commissioned by the local broadcaster CBS, was conducted on 2,531 adults across the country and had a margin of error of 1.9 percentage points with a 95 percent confidence level. 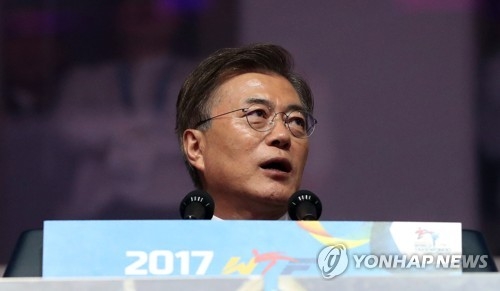