SEOUL, June 26 (Yonhap) -- Only one in five state-owned companies would have met the new government requirement of hiring more than 30 percent of new recruits from residents of their host cities last year, government data showed Monday.

The new requirement set by the Moon Jae-in government aims to get public enterprises to take root in provincial cities where they have moved. Many companies relocated their headquarters away from Seoul as part of the liberal Roh Moo-hyun administration's innovative town project a decade ago.

Examination of hiring data showed only 16 of 76, or 21.1 percent, of state-funded enterprises would have met the new government's requirement last year, the government portal All Public Information in One (ALIO) showed.

The Korea Media Rating Board (KMRB) in the southeastern port city of Busan topped the list with the employment of four local residents of the five new people hired, or 80 percent.

The Korea Foundation for the Promotion of Private School in the southeastern provincial city of Daegu came in second with 61.5 percent, followed by the Korea Housing & Urban Guarantee Corp. in Busan at 53.3 percent and the Game Rating and Administration Committee in Busan at 50.0 percent. 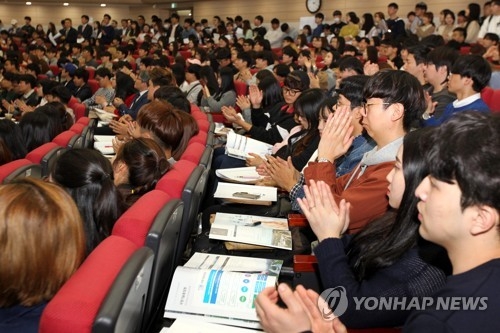