JECHEON, South Korea, June 26 (Yonhap) -- The Jecheon municipality in South Korea's central province of North Chungcheong said Monday it plans to open a cable car system in April next year that will be the longest one in the country and link the Cheongpung Lake tourist spot with the summit of the town's Mount Bibong.

The city government granted a franchise to Cheongpung Ropeway Co. in 2013 to build and operate the cable car system.

Construction of the 37.1 billion won (around US$32.71 million) project began in December last year and was originally scheduled to be completed by September this year, when it will host an international exposition focused on the Korean medicine and biotech industry. 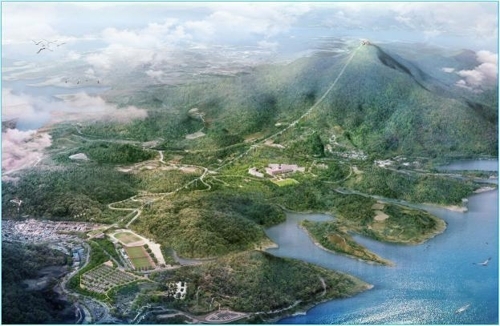 But the city government and Cheongpung Ropeway have postponed the opening of the 2.1-kilometer cable system to April, as the construction of the cable car stations were unexpectedly delayed.

The cable car link allows visitors to reach the 531-meter summit in nine minutes and view the landscape of the lake and nearby Mount Wolak. The system has 43 cabins with one cabin carrying 10 people and is projected to carry a maximum of 12,000 passengers a day.

The cable car system is longer than a 1.97-kilometer one over Mount Mireuk in the city of Tongyeong on the country's southern coast, which is currently Korea's longest.