During a parliamentary confirmation hearing, Han Seung-hee, the designate for the National Tax Service (NTS) commissioner, also warned against business tycoons' possible attempts to dodge inheritance or gift taxes, which he said have frustrated faithful taxpayers.

"I (if appointed) will focus on ensuring that taxpayers faithfully pay their taxes to stably secure tax revenues," he said during his opening remarks. "To realize justice in taxation, I will sternly handle anyone who deliberately evades taxes in accordance with law and principles." 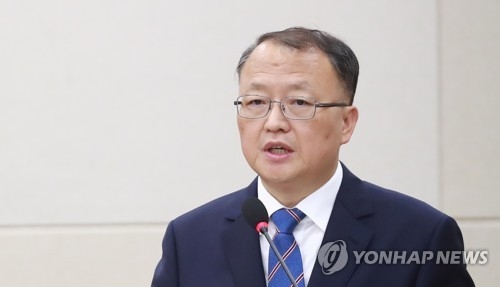 Han said that the NTS under his leadership will employ various scientific methods, including big data analysis, to keep citizens informed of their tax obligations.

The nominee also warned of an intense crackdown on those shifting their assets to offshore tax havens, and on any attempts by the wealthy to exploit legal loopholes to avoid inheritance and gift taxes.

"Such taxation irregularities have seriously undermined law-abiding citizens' will to voluntarily pay taxes," he said. "We will rectify them by having our staff and resources concentrated on tackling them."

Asked whether the NTS is carrying out a tax probe into Choi Soon-sil at the center of a major corruption scandal that led to the ouster of former President Park Geun-hye, Han said the probe is ongoing.

Choi's family has been under intense criticism for allegedly exploiting its decades-old ties to Park to amass huge assets.

Han's appointment does not require parliamentary consent, but any disapproval is likely to impose a political burden on President Moon Jae-in.