The Asian Football Confederation (AFC) earlier handed down penalties to three Jeju players for their role in a melee after an AFC Champions League match against Urawa Red Diamonds at Saitama Stadium in Saitama, Japan, on May 31. 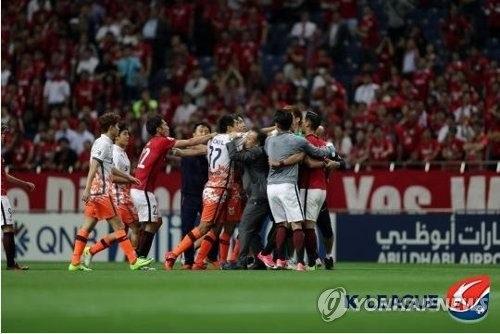 The AFC must complete its review of Jeju's appeal and announce its findings within seven days.

During the second leg of their round of 16 series, Cho was sent off on his second yellow card in the 81st minute for a hard tackle on Shinzo Koroki. Then after the match, Baek, an unused substitute, came charging off the bench and struck Yuki Abe with an elbow.

After Urawa won 3-0 to clinch a spot in the quarterfinals, some Jeju players were even seen chasing Urawa players off the pitch.

If their penalties aren't overturned, the three Jeju players will be banned from all official domestic, continental and international football matches, including the K League contests at home.

Jeju are currently third in the 12-team K League Classic. They finished third last year in the first division.

Depending on the result of their appeal, Jeju may also consider taking the matter to the Court of Arbitration for Sport (CAS), the world's highest sports tribunal.