SEOUL, June 26 (Yonhap) -- South Korea will launch a project later this year to provide 300,000 rental homes to jobseekers that can help ease the financial burden of young people, the land and infrastructure ministry said Monday.

The rental homes will be supplied gradually during the President Moon Jae-in's five-year term that began May 10.

In a move to fulfill one of the chief executive's major pledges, the government will announce a specific plan to provide share houses and other forms of rental homes to people in their 20s and 30s. The move involves transforming old public buildings into residential homes, Land, Infrastructure and Transport Minister Kim Hyun-mee said.

She made the comment during her visit to rental homes offered to young graduates who are residing in Dongdaemun-gu and Gwangjin-gu in eastern Seoul.

Many college graduates are struggling to cope with high tuition fees and high residential costs compounded with the difficulty of landing a job, particularly in Seoul. 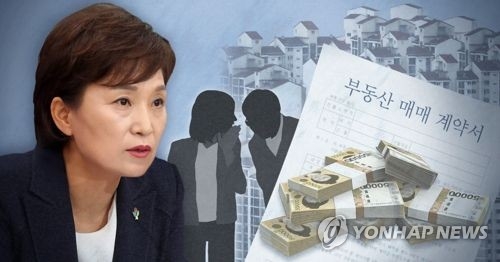 In her inaugural speech last Friday, the minister vowed to crack down on speculative real estate investments.

Pointing out it is real-estate speculation that has pushed up home prices in recent years, she said the government will show zero tolerance toward forces seeking high returns through repetitive property investments. Such actions are cited for making it harder for ordinary people to buy homes.

The ratios were lowered from the previous 70 percent and 60 percent, respectively.