The 19-year-old left home for Spain earlier in the day while rumors continue to swirl around his future destination.

Lee made a debut with Barca's B team two seasons ago, but has mostly been playing with Juvenil A (under-19) team since then.

Lee has a contract with the Catalan club until 2019 and reportedly has a buyout clause worth 3 million euros (US$3.4 million). And because of Junveil A's age limit, Lee, now 19, must sign a new professional contract before Aug. 31 this year.

He could try to earn a promotion to FC Barcelona B, though European media have said he likely won't get the call.

Lee's agent, Pere Guardiola, has said German clubs Borussia Dortmund have inquired about the youngster. FC Schalke 04, Bordeaux, Benfica and FC Porto have also been linked with the forward. 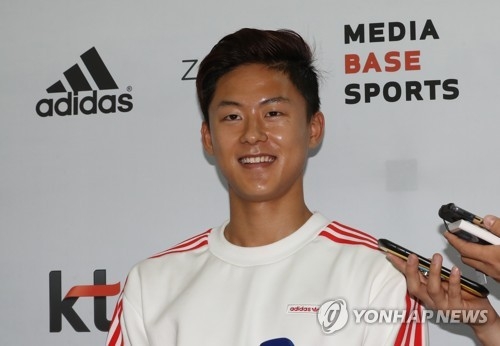 Before boarding his flight, Lee said nothing has been decided on his future.

"I am still under contract with Barcelona," he told reporters at Incheon International Airport. "After meeting with the team and listening to other people's advice, I'll make the best decision possible."

Lee, who starred for South Korea at the FIFA U-20 World Cup last month, said he has been in touch with his agent to gauge the situation.

"If I don't stay with Barcelona, then I'll choose a team that offers me options and visions that suit me the best," Lee added.

Lee said he's at an age when he has to be playing consistently to take the next step, and that he'd like to choose a team that will give him that opportunity.

"I have a different mindset now than before," Lee added. "I have to get ready for a new season at a critical juncture. I'd like to develop into a better football player."

Lee has yet to play for Barca's main squad, but the teenager said he isn't anxious about joining the likes of Lionel Messi and Neymar on the field.

"If I play well for another club, then I just may return to Barcelona later," he said. "That's football. And it won't mean failure even if I move to another team."

At career crossroads, Barca prospect wants to talk to Spanish side first

At career crossroads, Barca prospect wants to talk to Spanish side first