(ATTN: UPDATES with additional remarks from Trump and Moon in paras 4-7; ADDS photo)

WASHINGTON, June 30 (Yonhap) -- The leaders of South Korea and the United States joined their voices Friday in urging North Korea to give up its nuclear ambition, calling it a "better path" for the safety and security of its own people.

"The U.S. calls on the regional powers and all responsible nations to join us (in) implementing sanctions and demanding that the North Korean regime choose a better path and do it quickly. And a different future for its long suffering people," U.S. President Donald Trump said.

In a joint press conference with South Korean President Moon Jae-in following their bilateral summit at the White House, the U.S. leader also declared his country's strategic patience towards the communist North was over.

"The North Korean dictatorship has no regard for the safety and security of its people or its neighbors and has no respect for human life -- and that's been proven over and over again," Trump said.

"We are working closely with South Korea and Japan as well as partners around the world on a range of diplomatic, security and economic measures to protect our allies and our own citizens from this menace known as North Korea," he added.

Moon thanked his U.S. counterpart for his "firm determination to resolve the North Korean nuclear issue and establish lasting peace on the Korean Peninsula."

"The most serious challenge facing South Korea and the United States is North Korea's nuclear and missile threats. President Trump and I agreed to work closely coordinate our related measures while placing the top priority on the resolution of the North Korean nuclear issue," Moon said.

The South Korean president also said he and Trump agreed to try to resolve the North Korean nuclear issue fundamentally based on a comprehensive, phased approach employing both sanctions and dialogue. He also noted the countries will further strengthen their joint defense capabilities against North Korean threats.

"I wish North Korea will not overlook our decision," he said. 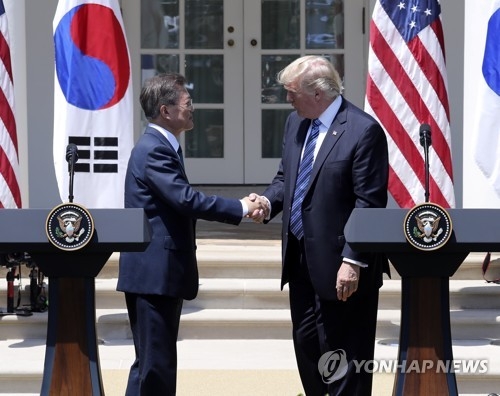 The South Korean president also stressed the importance of the Korea-U.S. alliance in dealing with the provocative North.

"There are now deep trust and friendship between President Trump and I, and I believe they will provide a strong basis in tackling many problems in the future," Moon said.

Trump agreed, calling the alliance a "cornerstone of peace and security in a very, very dangerous part of the world."

Moon said he and Trump have agreed that only strong defense can enable true and lasting peace.

"(We) agreed to strengthen our overwhelming deterrence through the joint defense posture of South Korea and the United States, including our nonproliferation efforts. We agreed to firmly counter North Korean threats and provocations," he said.

The leaders also agreed to boost their countries' cooperation in dealing with global issues.

"We agreed to expand and develop the Korea-U.S. alliance into a global partnership while jointly dealing with global challenges such as terrorism," the South Korean president said.