The trade pact, which has been in effect since 2012, was one of the two biggest topics at the talks, along with North Korea. Trump said the agreement, which has long been considered an economic alliance between the two sides, has been "rough" for the U.S. and called it "not exactly a great deal." 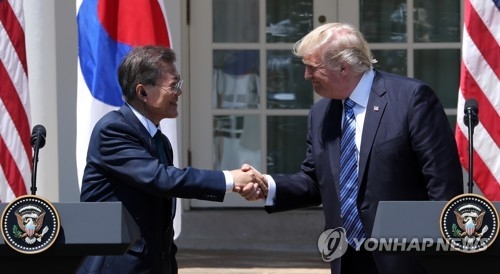 Trump also called for "fair" sharing of the cost of American military presence in the South.

"We are working together to ensure fair burden-sharing in support of the United States military presence in South Korea. Burden-sharing is a very important factor, a factor that's becoming more and more prevalent, certainly in this administration," he said.

South Korea currently pays about half the costs, about US$900 million a year, to help finance the stationing of some 28,500 American troops in the country. U.S. officials acknowledge that it would cost more to keep those troops stationed in the U.S. than it does in Korea.

Earlier this week, a senior White House official also said during a briefing to preview the summit that the South is a "model ally" in terms of burden sharing, spending about 2.7 percent of its gross domestic product. The official also said the U.S. "shouldn't view South Korea as somehow laggard on that front."