WASHINGTON, June 30 (Yonhap) -- A girl's statue symbolizing victims of Japan's wartime sexual slavery was unveiled near the southern U.S. city of Atlanta on Friday, despite Japanese efforts to block the establishment.

The statue set up at the Brookhaven Park in the city of Brookhaven is the third such monument after those in California and Michigan. About 200 people attended the unveiling ceremony amid drizzling rain, including a surviving victim of the slavery, Kang Il-chool, as well as city officials and Korean activists.

The 89-year-old Kang stroked the statue with tears in her eyes.

Japan has staged a campaign to block the statue's establishment.

Earlier this month, the Japanese consul general in Atlanta, Takashi Shinozuka, claimed in a media interview that sexual slavery victims were actually "paid prostitutes" as he urged he Brookhaven City Council to reverse its decision to authorize the memorial's establishment.

Shinozuka also claimed the statue is a "symbol of hatred and resentment against Japan."

Historians estimate that up to 200,000 women, mainly from Korea, which was a Japanese colony from 1910 to 1945, were forced to work in front-line brothels for Japanese soldiers during World War II. Japan has long attempted to water down the atrocity. 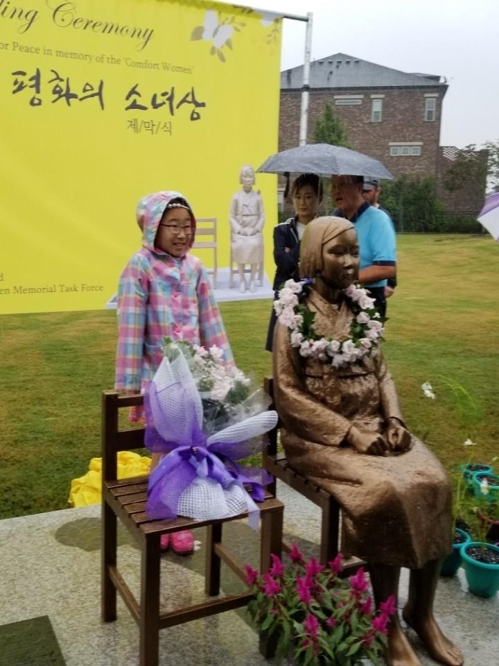