SEOUL, July 1 (Yonhap) -- U.S. President Donald Trump has made it official that the free trade deal with South Korea is up for negotiation, setting the stage for a tough tug-of-war between the two trading partners amid growing concerns that Washington is turning to protectionism to secure its industries and jobs.

The deal -- which went into effect in 2012 -- has widely been considered a symbol of the economic bond between the two countries that have maintained a close military alliance for decades. But the fate of the original free trade agreement (FTA) was sealed when Trump vowed to fix or scrap the pact on the grounds that it has favored Seoul and resulted in a massive U.S. trade deficit with South Korea.

On the campaign trail, Trump denounced the free trade pact as a "job-killing" deal and a "disaster," sparking concerns in Seoul that he could push for a renegotiation of the landmark accord.

On Friday, at the summit meeting with South Korean President Moon Jae-in in Washington, Trump said South Korea and the U.S. are already in talks to renegotiate the agreement. 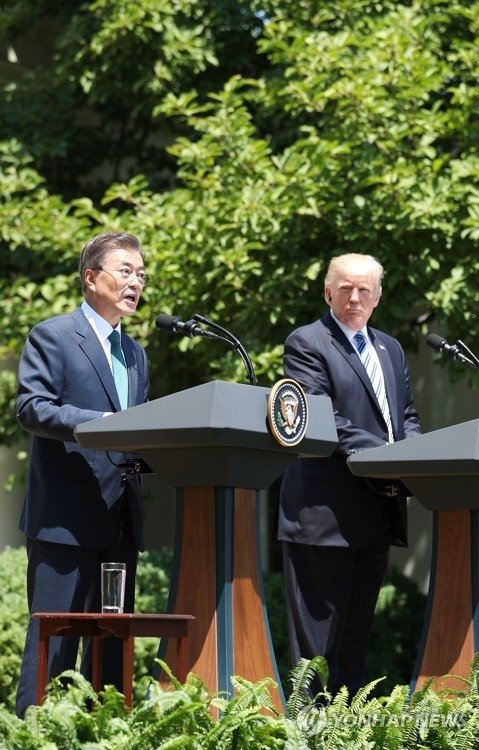 "We are renegotiating a trade deal right now as we speak with the South Koreans and hopefully it will be an equitable deal, it will be a fair deal to both parties," Trump told reporters at the start of the one-on-one talks with his South Korean counterpart at the White House.

At thier first summit, the trade deal emerged as a key agenda item, along with North Korea's ever evolving nuclear and long-range missile threats.

Trump said the trade deal has been rough for the U.S., noting that the North American country's trade deficit with the Asia's fourth largest economy has increased by more than $11 billion between 2011, a year before the FTA went into effect, and last year.

Seoul's central bank has recently said a drop in the export of South Korean cars and steel products are the reasons behind the decline in the current account surplus with the U.S.

Autos and steel products are likely to be key issues between South Korean and U.S. officials during negotiations.

For many years, South Koreans have preferred luxury European and Japanese brands over American ones. In April, the top three best-selling foreign vehicles models in South Korea were Mercedes-Benz's E220d, BMW's 320d and Lexus' ES300h, according to the Korea Automobile Importers and Distributors Association.

South Korea's top automaker, Hyundai Motor Co., is widely viewed by many Americans as a key source of an imbalance in bilateral auto trade.

Still, Hyundai Motor contributed to the U.S. economy by creating more than 100,000 jobs and investing more than US$12 billion in the U.S. with a commitment to invest another $3 billion, according to Jeffrey Jones, former chairman of the American Chamber of Commerce in South Korea.

The U.S. has imposed a series of anti-dumping duties on Korea-made steel products, citing that excessive imports of steel threatened the country's national security.

Some analysts said South Korea could push for U.S. concessions in the service sector as its service balance deficit with the U.S. rose to $14.28 billion in 2016 from $14.09 billion a year earlier.

Whatever the future holds, many in South Korea said that the FTA will be changed, and although the outcome of talks cannot be determined at this juncture, Seoul may find itself making concessions.

"Both countries will likely engage in some tough talks, yet Seoul in the end may find itself meeting Washington's demand to some extent," a local trade expert, who declined to be identified, said.

He said that South Korean negotiators need to always maintain a balance of interest.

"If South Korea relents on something it should try to win in other areas," the source said.