WASHINGTON, June 30 (Yonhap) -- The first Korea-U.S. summit under the countries' new administrations came to an end Friday, with newly formed trust and friendship between their leaders signaling further development of their alliance down the road, South Korean officials noted.

South Korean President Moon Jae-in began his four-day trip to Washington on Wednesday with a clear aim to form a personal friendship or an alliance with his U.S. counterpart, Donald Trump.

South Korean officials said a close relationship was necessary to ensure frequent and frank talks between the two leaders whenever necessary.

"The main objective of the summit was in building a strong trust between the leaders of the two countries," Yoon Young-chan, Moon's chief press secretary, told reporters.

"That is why the leaders held talks over the past two days, and they certainly built a personal trust in the process that exceeds what we had hoped for," he added.

Moon's two-day meeting with Trump ended Friday. The leaders agreed to seek a phased denuclearization of North Korea, and also to strengthen their alliance and joint defense capabilities against nuclear and missile threats from North Korea. 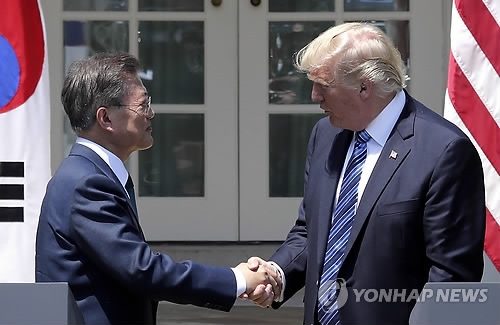 The two also reached agreement on many other issues, which, South Korean officials said, have been "neglected" under Seoul's former conservative administrations.

Moon came into office last month after winning a presidential by-election caused by the ouster of his conservative predecessor, Park Geun-hye, over a bribery scandal.

Those issues that have been left untouched but addressed at this week's summit included the United States' trade deficit with South Korea.

Trump earlier called for renegotiation of the Korea-U.S. free trade agreement, implemented in March 2012, calling it a "horrible deal" that destroyed U.S. jobs.

Following his first talks with Moon, the U.S. president welcomed Seoul's plan to purchase US$25 billion worth of liquefied natural gas from an Alaska-based U.S. energy firm, noting the deal will help reduce his country's deficit.

He also noted South Korea was giving big deals for military and defense equipment to the United States.

Apparently satisfied, the U.S. president restrained from repeating a call for renegotiation of the Korea-U.S. free trade deal in a joint press conference with Moon following their talks.

Seoul officials, however, said the most significant and important outcome of the summit was the leaders' new, personal friendship.

"The key point is that South Korea elected a new leader and that new leader set up a dialogue channel with the U.S. leader," an official from Seoul's presidential office, Cheong Wa Dae, said, asking not to be identified.

"It is more important that the two leaders established not only a dialogue channel but also a very close personal relationship and trust," he added. 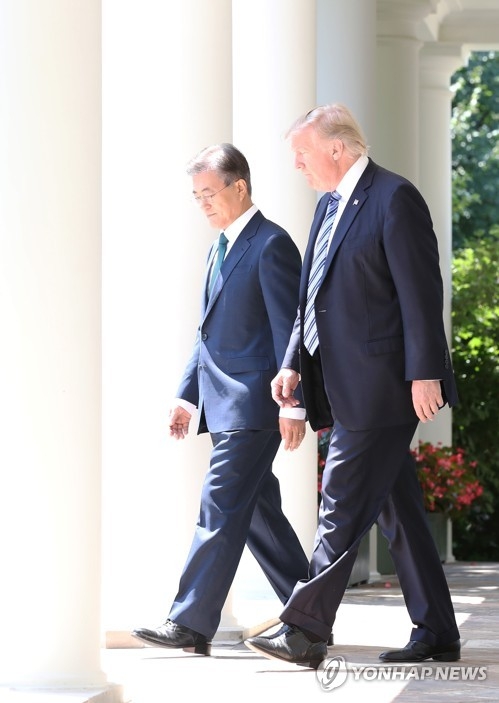 Such an emphasis on Moon's personal ties with his U.S. counterpart apparently stems from the importance of the Korea-U.S. alliance, but also from the fact that the two will lead their respective countries, and thus their alliance, at least for the next four years.

"If President Trump gets reelected, he and I will work together for the next five years, during which we will have to make joint efforts to resolve the North Korean nuclear issue. And I believe mutual trust between us two leaders will be very important for such efforts," Moon said earlier.

Partly confirming his newly established friendship with the new South Korean leader, Trump too said he looked forward to working with Moon.

"I look forward to working with you for many years to come to strengthen our alliance, protect our citizens from common threats, and deepen the enduring bonds of friendship, between Americans and the great people of South Korea," he told the joint press conference.

Also at the summit, Moon extended an official invitation to Trump to visit his country within the year.