Moon's visit here marked his maiden trip as a South Korean president. He came into office May 10.

The trip largely sought to reaffirm and enhance the alliance, as well as the United States' defense commitment to South Korea against provocative North Korea.

"The main objective of the summit was to build strong trust between the leaders of the two countries. That is why the leaders held talks over the past two days, and they certainly built personal trust in the process that exceeds what we had hoped for," Moon's chief press secretary Yoon Young-chan said earlier. 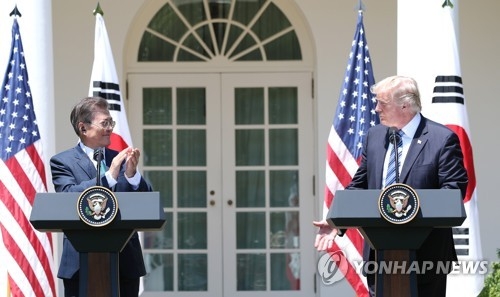 Moon also appeared to have won a meaningful concession from Trump, who earlier advocated a resumption of dialogue with North Korea after the communist state completely dismantles its nuclear capabilities.

In a joint statement issued after their summit, they said, "President Trump supported President Moon's aspiration to restart inter-Korean dialogue on issues, including humanitarian affairs."

Accordingly, they agreed to seek a "phased" denuclearization of North Korea, which, according to Moon, may allow engagement with North Korea following a freeze of its nuclear activities, partly to discuss its reward for a nuclear freeze and/or denuclearization.

"We agreed to work together toward a fundamental resolution of the North Korea nuclear issue based on a phased and comprehensive approach, utilizing both sanctions and dialogue," Moon said in a joint press conference with Trump following their bilateral summit at the White House on Friday.

At the same time, the two allies agreed to boost their joint deterrence against the North.

"President Trump and I agreed that only strong security can make true peace possible. Through the Korea-U.S. joint defense posture, including extended deterrence, we agreed to strengthen our overwhelming deterrence," Moon said.

However, the Moon-Trump meeting has also exposed possible bumps down the road, including how to address the United States' trade deficit with South Korea.

Trump hinted at future renegotiation of the Korea-U.S. free trade agreement, noting it has been a "rough" deal for the U.S.

South Korean officials dismissed the possibility of reopening trade pact negotiations, citing Moon's proposal for a joint study on the actual outcome of the 2012 agreement.

In their joint statement, the leaders simply said they will foster a "level playing field," partly by "working together to reduce the global overcapacity of such basic materials as steel, as well as non-tariff barriers to trade." 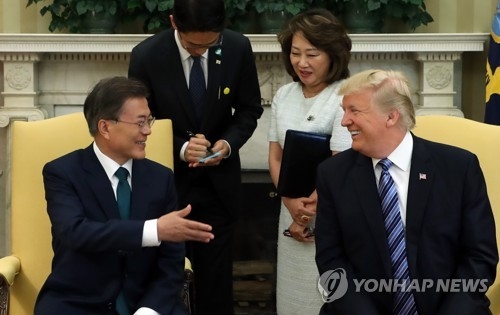 During Moon's trip to Washington, a group of representatives from 52 South Korean firms accompanying the South Korean leader announced a plan to jointly invest US$12.8 billion in the United States over the next five years.

Also offering a further appeasement to the U.S., Seoul announced a plan to purchase $25 billion worth of natural gas from an Alaska-based U.S. energy firm.

Moon and Trump will meet again next week when they both fly to Hamburg, Germany, for the Group of 20 summit.

The two and Japan's Prime Minister Shinzo Abe will hold a three-way meeting over dinner on the sidelines of the multilateral talks involving leaders from 17 other developed and developing countries around the globe next Friday and Saturday, they said.

Trump is also expected to visit South Korea within the year on the official invitation from his South Korean counterpart.