They emphasized the two countries do not maintain a hostile policy toward North Korea and that the door to dialogue "remains open under the right circumstances."

Moon earlier said talks can be resumed if the North freezes its nuclear and missile activities.

Seoul and Washington shared top priority to resolve the nuclear issue and agreed to put maximum pressure on Pyongyang while affirming their resolve to work for "complete, verifiable and irreversible denuclearization of the Korean Peninsula in a peaceful manner." Sanctions are a tool of diplomacy, they noted.

"They affirmed their commitment to fully implement existing sanctions and impose new measures designed to apply maximum pressure on North Korea to compel Pyongyang to cease its provocative actions and return to sincere and constructive talks," said the statement. 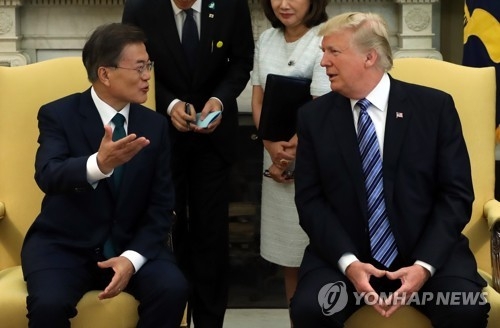 They also reaffirmed their commitment to an increased deterrence against North Korean threats.

"To increase coordination on alliance issues, the leaders committed our foreign affairs and defense agencies to regularize a "2+2" ministerial meeting, as well as a high-level Extended Deterrence Strategy and Consultation Group to employ all elements of national power to strengthen extended deterrence," the statement said.

A South Korean official explained that the two-plus-two meeting will involve foreign and defense ministers from both countries.

The leaders also vowed to step up efforts to strengthen their countries' military alliance.

"The two leaders affirmed the alliance's fundamental mission to defend the ROK through a robust combined defense posture and the enhancement of mutual security based on the U.S.-ROK Mutual Defense Treaty," it said. ROK stands for South Korea's official name, the Republic of Korea.

The leaders have also agreed to work to expeditiously enable the transfer of wartime operational control of South Korean forces to Seoul, a move initially agreed upon more than a decade earlier but delayed indefinitely under Seoul's former conservative government.

The transfer, however, will be conditioned on Seoul's possession of independent defense capabilities, it said.

Such capabilities include "critical military capabilities necessary to lead the combined defense, and detect, disrupt, destroy, and defend against North Korean nuclear and missile threats, including through interoperable Kill-Chain, Korean Air and Missile Defense (KAMD), and other alliance systems," the statement said.

However, the statement did not hint at an imminent renegotiation of the countries' free trade agreement, which was once called a "horrible deal" by the U.S. president.

Also, Trump earlier said the two countries were "renegotiating a new trade deal" while meeting with the South Korean president at the White House, prompting concerns that the U.S. may seek renegotiation of the free trade deal implemented in early 2012.

Instead, the two leaders affirmed their commitment to fostering "expanded and balanced trade while creating reciprocal benefits and fair treatment between the two countries."

"In that regard, the two sides further committed to foster a truly fair and level playing field, including working together to reduce the global overcapacity of such basic materials as steel, as well as non-tariff barriers to trade," said the statement.

An official from South Korea's presidential office Cheong Wa Dae confirmed that a renegotiation of the Korea-U.S. FTA was not part of the agreement reached at the summit.

"What is on the joint statement is all there is regarding economic issues," the official told reporters.

The leaders agreed to hold "senior economic dialogue" as part of efforts to enhance the countries' bilateral cooperation on other economic opportunities, such as cybersecurity, information and communication technology, and civilian space programs.

Seoul and Washington will also enhance their bilateral cooperation in dealing with global issues including terrorism.

"The two leaders condemned the grave human suffering and violence in Iraq and Syria caused by ISIS, and reaffirmed the strong U.S.-ROK partnership in the Global Coalition to Counter ISIS," the statement said.