SEOUL, July 1 (Yonhap) -- The ruling Democratic Party welcomed the summit between the leaders of South Korea and the United States as paving the way for Seoul to play a leading role in resolving the North Korea problem.

The party said in a statement that the first meeting between President Moon Jae-in and U.S. President Donald Trump was more successful than expected and filled the diplomatic void that lasted for more than six months in the wake of former President Park Geun-hye's corruption scandal and subsequent impeachment.

The party emphasized Trump's support in the joint statement for Seoul's leading role in fostering an environment for peaceful unification of the Korean Peninsula. The party said it is meaningful for the national status that Seoul takes the initiative on the Korea Peninsula problem.

The two allies will continue pursuing mutual prosperity and peace on the peninsula on an equal footing and the Korea-U.S. alliance will be strengthened further, it added.

Meanwhile, the main opposition Liberty Korea Party said the summit showed there were "so many challenges lying ahead of the Moon Jae-in government in keeping Korea-U.S. relations in the future," citing President Trump's emphasis on the need to renegotiate both the landmark trade deal between the two allies which went into effect in 2012 and the cost of American military presence in the South.

"While not hurting the firm Korea-U.S. alliance, the government should make diplomatic efforts to protect national interests," it said.

Moon and Trump held their first summit meetings in Washington on Thursday and Friday on various issues ranging from the bilateral alliance and North Korea's nuclear program to trade. 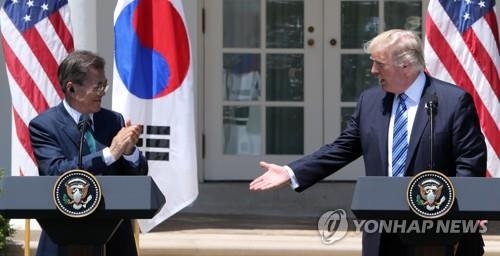