SEOUL, July 2 (Yonhap) -- President Moon Jae-in returned Sunday from the United States where he had a summit with U.S. President Donald Trump on North Korea, alliance and trade issues.

Upon arrival, he issued a statement to the nation stressing the summit has set the stage for South Korea to play a bigger role in resolving North Korea's nuclear issue diplomatically.

"Through this summit, the two countries agreed to achieve their common goal of the denuclearization of the Korean Peninsula in a peaceful manner," Moon said.

"Also we have secured the United States' support for us to lead the resolution of the Korean Peninsula problem through dialogue."

In a joint statement after the summit on Friday (U.S. time), Trump expressed support for Moon's aspiration to resume talks with the North and Seoul's leading role in fostering an environment for peaceful unification.

"We now have to start a long journey to build a structure of lasting peace on the Korean Peninsula. Now we have taken the first step," he said.

He also underscored that he and Trump forged personal ties of friendship and trust, which will enable closer consultation between the two countries.

The meeting marked his first bilateral talks with the U.S. leader, and the visit was his maiden trip since taking office May 10.

The talks largely sought to find ways to strengthen the countries' alliance and their joint efforts to denuclearize North Korea.

They also made it clear that dialogue will be possible, possibly following initial steps by North Korea to denuclearize, an apparent concession from Trump who earlier advocated a resumption of dialogue after the communist state completely dismantles its nuclear capabilities.

"Noting that sanctions are a tool of diplomacy, the two leaders emphasized that the door to dialogue with North Korea remains open under the right circumstances," the joint statement said.

Still, one of the most positive outcomes of the summit may have been Moon's newly formed close and personal relationship with the U.S. president, officials from the presidential office Cheong Wa Dae have noted. 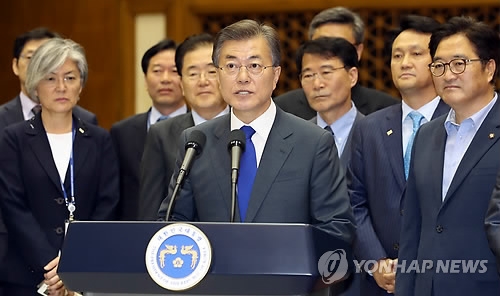 Moon had personally noted the importance of his personal relationship with Trump, saying they may work together over the next five years. And they certainly built personal trust in the process that exceeds what we had hoped for," Moon's chief press secretary Yoon Young-chan told reporters earlier.

Moon and Trump will meet again next week when they both fly to Hamburg, Germany, for the Group of 20 summit.

They will be joined by Japanese Prime Minister Shinzo Abe for dinner and three-way talks over a wide range of issues that will include North Korea, according to their aides.

Trump is also expected to visit South Korea before the year's end on the invitation of his South Korean counterpart extended at their Washington summit.