WASHINGTON, July 1 (Yonhap) -- President Moon Jae-in said Saturday that any talk of renegotiation of the free trade pact between South Korea and the United States is "outside of the agreement" he reached in summit talks with President Donald Trump, after Trump suggested the two sides agreed to redo the deal.

"All you have to do is look at the content of the agreement (joint statement). The rest is outside of the agreement," Moon said during the meeting with the correspondents held at the U.S. President's guest house, also known as Blair House, in response to a question about whether there has been any agreement on renegotiating the deal.

According to Moon, U.S. officials talked about trade deficits the country has with the South, especially in the auto and steel industries. In response, South Korean officials said that even according to analysis by the U.S. Commerce Department, the deal has been working in a mutually beneficial manner, such as expanding the share of each other's market, he said.

"We concluded the discussions with a counterproposal, and without agreement, that if there is still room for improvement, if you want to talk about non-tariff barriers, the two countries can establish a working-level task force to examine and analyze the effects of the FTA," Moon said. 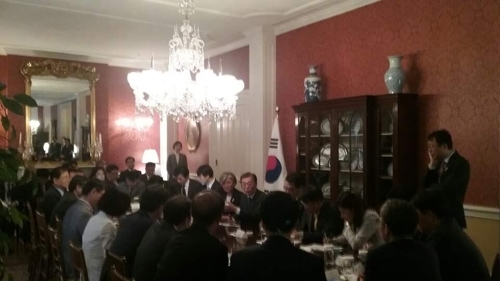 After taking office in May, Moon ordered the suspension of the THAAD deployment until an environmental assessment is completed. That decision spurred doubts that it might be a precursor to reversing the decision on THAAD deployment altogether, even though officials assured there is no such intent.

"One of such conditions could be a promise by North Korea that it won't undertake additional provocations. The release of American citizens can also be a condition, but it is desirable not to specify those conditions at the current stage," Moon said.

"President Donald Trump said this cannot help but be determined by intuition amid the evolving situation. He appeared to trust South Korea, saying the South must have better intuition as it's close (to North Korea)," he said. "It would be wise not to specify (such conditions)."

Still, Moon said that dialogue is certainly possible if the North promises to freeze its nuclear program.

"It's difficult to specify the right conditions for restarting dialogue, but what I have proposed is that if North Korea promises to freeze its nuclear program, it's possible to have denuclearization talks," he said. "A nuclear freeze would be the entrance of the dialogue and the exit would be complete dismantlement. We have to act simultaneously while going through various phases."

Asked if he discussed military options with Trump, Moon said the two sides agreed to seek a peaceful resolution. 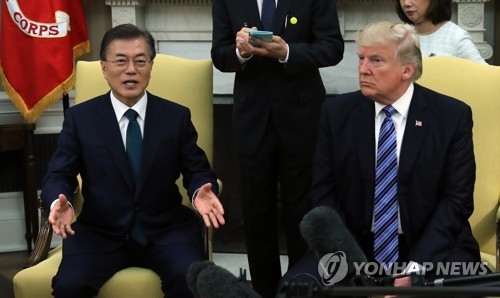