(ATTN: UPDATES with the inquiry of Ahn; ADDS photo)

SEOUL, July 2 (Yonhap) -- Former presidential candidate Ahn Cheol-soo was questioned Sunday by his party's fact-finding team, which is looking into the party's fraudulent allegation about President Moon Jae-in's son during the election campaign earlier this year.

The in-house investigation team of the minor opposition People's Party said it spoke with Ahn for about 50 minutes in the afternoon.

"We will announce the result of our investigation into the affair including the interview with former chairman Ahn early this week," Rep. Kim Kwan-young, chief of the team, said in a statement.

The face-to-face inquiry followed the panel questioning Ahn by phone on Saturday.

"The people were deceived and the People's Party was deceived too. We will get to the bottom of the case," Park Joo-sun, interim leader told reporters, earlier on Sunday.

A member of the party named Lee You-mi was arrested Thursday for spreading misinformation during the presidential campaign that Moon used his influence to help his son, Joon-yong, get a job at a public agency in late 2006.

Lee confessed to creating the anonymous tip-off and handing it over to Lee Jun-seo, a senior party official.

Lee You-mi reportedly stated she didn't act alone, but the party insists that it had no knowledge of the scheme. Ahn, then a presidential candidate, has yet to make any official statement.

Earlier in the day, prosecutors investigating the case said they have summoned Lee Jun-seo and two former campaign officials to appear for questioning Monday. Lee, a former member of the party's leadership panel, has been banned from overseas travel pending the probe. 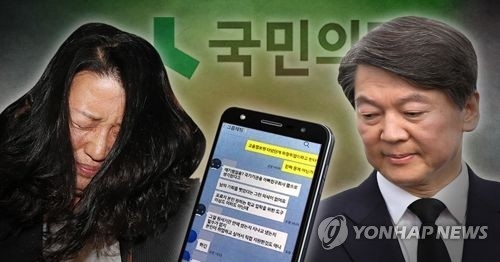