The amount of foreign net purchases is the biggest since the first half of 2009, when foreigners net bought 11.1 trillion won of Korean stocks as the 2008 global financial crisis subdued.

It is the fourth time that foreigners net bought more than 10 trillion won worth of Korean stocks during the first six months of the year.

The record net purchase was set at 12.2 trillion won during the January-June period in 2004.

Foreigners also purchased 10.8 trillion won of Korean shares during the first half of the year in 2000 amid the burst of the information technology bubble in 2000.

LG Electronics Inc. topped the list with foreigners having net bought 972 billion won of the company stocks over solid earnings to raise their prices by 55.43 percent during the six-month period.

Samsung Electronics Co. ranked first in the amount of net selling by foreigners with 1.67 trillion won on profit-taking amid the sharp rise in the price of the stocks of the company.

Foreigners also net sold 376 billion won worth of SK hynix stocks amid the dramatic price hikes of the semiconductor manufacturer due to the chip market boom.

Yang Ki-in of Shinhan Investment Corp. attributed the foreign buying spree to the weak U.S. dollar and the strong currencies of developing countries, as well as the solid corporate earnings outlook, rising trade surpluses and a sound current account balance.

Kim Yong-koo of Hana Financial Investment Co. forecast an additional influx of up to 40 trillion won of foreign capital on a mid-term basis, citing the market capitalization and the earnings per share. 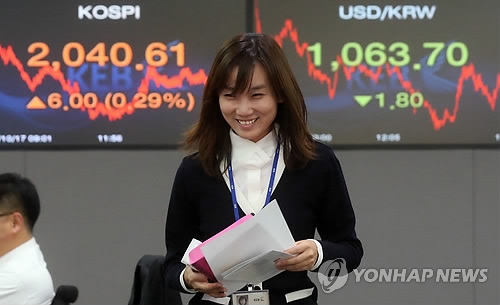 Foreigners net buy biggest amount of Korean stocks in 1st half since 2009: data

Foreigners net buy biggest amount of Korean stocks in 1st half since 2009: data