SEOUL, July 2 (Yonhap) -- President Moon Jae-in has received a boost in his push for improving inter-Korean relations as U.S. President Donald Trump has formally thrown his weight behind it, government officials and experts here said Sunday.

They emphasized it's important to follow up their summit agreement via close coordination on a more specific "road map."

In their meeting in Washington, D.C. last week, Moon and Trump agreed to leave the door to dialogue with North Korea open "under the right circumstances," according to a joint statement.

Trump also "supported President Moon's aspirations to restart inter-Korean dialogue on issues including humanitarian affairs" and hailed South Korea's "leading role" in creating the conditions for the peaceful reunification of the two Koreas.

The agreement has helped ease concerns about a possible mismatch in the allies' approach toward the nuclear-armed North.

It's apparently one of the biggest accomplishments for Moon, a liberal president who took office in early May, in his first talks with Trump.

"With regard to our government's resolve to resume South-North talks, it's true that there was some burden from worries that it may undermine (international) sanctions on North Korea," a government official said on the condition of anonymity.

The summit deal, however, has dispelled such a view and laid the groundwork for the Moon government to push for its North Korea policy "with more confidence," he added.

Kim Yong-hyun, a professor at Dongguk University, agreed that it will be of help in silencing criticism that Moon's policy to engage Pyongyang will harm Seoul's alliance with Washington.

"In that sense, it is expected to serve as an important chance for creating circumstances at home and abroad for restoring South-North relations," Kim said. 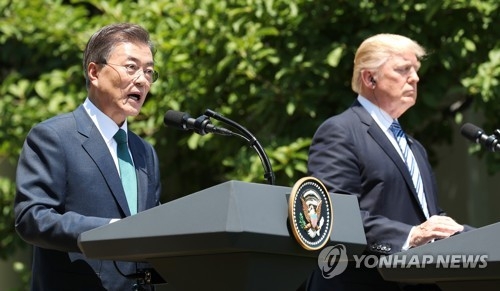 Other pundits stressed that the allies need to work on a specific road map on ways to resolve the thorny North Korea issue.

Yun Duk-min, former chancellor of the Korea National Diplomatic Academy, said the two sides seem to have reached a certain deal on the "direction" of how to denuclearize North Korea.

"A key task is to fine-tune a substantive policy on North Korea," he said. "(South Korea and the U.S.) should craft a road map for the time when North Korea returns to dialogue with sincerity."

After the summit, he pointed out, Moon talked about a "phased" denuclearization, but it was not included in the joint document, which instead reads the leaders "affirmed their commitment to fully implement existing sanctions and impose new measures designed to apply maximum pressure on North Korea to compel Pyongyang to cease its provocative actions and return to sincere and constructive talks."

Among the first steps is to completely freeze North Korea's nuclear and ballistic missile activities and set a period for the measure, he said.

"It's important for South Korea and the U.S. to consult on a strategy on the purpose and stage of using incentives and disincentives they have for North Korea," he said.

Meanwhile, former Unification Minister Jeong Se-hyun advised the Moon administration to dispatch a special envoy to Pyongyang to brief North Korean officials on the results of the Washington summit.

"(It) should send a special envoy and explain (the content of the joint statement) and also deliver our government's road map for its Korean Peninsula policy" to avoid risks from the North's possible misunderstanding, he said.