SEOUL, July 3 (Yonhap) -- Global smartphone makers are expected to fiercely compete with each other to win over consumers in the second half by launching new flagship devices, industry watchers said Monday, with Samsung Electronics Co. poised to release a new phablet to overcome its tainted brand image sparked by the suspended Galaxy Note 7 last year.

Market observers said Samsung, along with Apple Inc. and LG Electronics Inc., plan to release new smartphones in the coming months, with the companies focusing on showcasing nearly bezel-less designs.

Samsung is expected to release its Galaxy Note 8 phablet later this year, which comes with its latest Super AMOLED display with a 5.7-inch screen size and proprietary S-pen with new functions. As with the Galaxy S8 smartphones launched earlier this year, the new phablet is expected to adopt a nearly bezel-less design.

The Galaxy Note 8 is also expected to become Samsung's first flagship model to adopt dual cameras. The unveiling date is expected at around end-August or in September.

LG Electronics Inc., Samsung's smaller South Korean rival, also plans to release the V30 smartphone around September. With the size anticipated at 6.2 inches, industry watchers said the company is expected to focus on bolstering audio-related features, along the lines of its predecessor V10 and V20.

U.S. tech giant Apple also is rumored to be gearing up to release a range of new products marking the 10th anniversary of the iPhone series. While no details have been provided so far, industry watchers said the new iPhones will adopt the nearly bezel-less design in line with the latest industry trend. 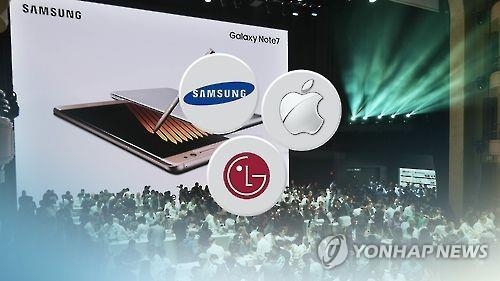